Right then – last week’s gentle question was this : -

Where did a man who wouldn’t interrupt a clarinet gig to collect his Oscar, the second man to take one small step, the place where Tolkein had Farmer Giles, and David’s father all meet ? Who was the last of the group to join them ?

I’m sure that you’ve worked out that : -

WOODY Allen famously didn’t collect his best director Oscar for Annie Hall, because he always had a gig playing the clarinet that night, and saw no reason to break his routine : BUZZ Aldrin was famously the second man to take the small step down from the lander onto the surface of the moon, Tolkein wrote “Farmer Giles of HAM “ and King David’s father was JESSE ( Jessie ) Woody, Buzz, Ham and Jessie are all characters in the TOY STORY films. The last to join them was Jessie, because she didn’t make her first appearance until Toy Story 2. 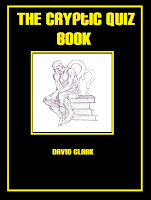 Here’s another one which I’m sure that you can make short work of.

What links the man who beat Foster and Jackson, The Garter, the Bath and the Thistle, the gang of the man who never did audition for the Monkees and the original edition of Trivial Pursuit, and how do the Spitfires help you organize them correctly ?

By the way, if you like this sort of question I’ve collected some of them, and other cryptic things, such as connections, sequences, tables and other things in The Cryptic Quiz Book – available in the usual places.
Posted by Londinius at 11:33