Liverpool’s Katherine Monks, Daniel Jenkin-Smith, Luke Nugent and their captain Chris Spencer thrashed Keele by 295 to 40 in their first round match. I did say at in my round up of the first round of matches that although Liverpool had amassed a huge total, their bonus conversion rate wasn’t great, and Keele never really competed on the buzzer, which made it difficult to assess how quick Liverpool were. Cardiff, represented by represented by Eleri Evans, Sara Caputo, Tom Parry-Jones and captain Roderick Lawford, had to battle to win a low scoring match against Exeter by 145 to 95. Now, on paper, this looked like a clear win for Liverpool. However Cardiff faced what looked like tougher opposition in the shape of Exeter, and their bonus conversion rate was better than Liverpool’s. So what I suppose I’m trying to say is that I went into this match with an open mind, believing that anything could happen.

Now, if you’re asked for an Edwardian composer, it won’t always be Elgar. However if you give the name Elgar you’ll probably be right more often than you’re wrong. Roderick Lawford had it to kickstart Cardiff’s push for a quarter final slot. Bonuses on Napoleon in Art brought two bonuses. Countries ending in – land – allowed Luke Nugent to get Liverpool off the tsrting blocks. Chemical elements and Greek Mythology provided a nice although tricky set of bonuses. 2 were taken. Sara Caputo knew the two main forms of Vitamin K. Literary works that faced prosecution was the set of bonuses attached to that question. The first mentioned Baudelaire’s “Les Fleurs du Mal”. Ah, memorise of French A Level - “Le poète est semblable au prince de nuées” – that line from “L’Albatros” always stayed with me, but I digress. They took the first two, but missed on D.H.Lawrence’s The Rainbow. Great book – Women in Love, nyah, not so much. Asked for the year of only two digits that saw the publication of Shelley’s “Ozymandias” Eleri Evans worked out that it had to be 1818. Physics took their score to 60. This took us up to the picture starter. We saw cities marked on maps of parts of the UK and the USA, and the teams were asked to give the one name shared by both. I recognized Bangor in North Wales, and knew that the other must be Bangor, Maine. Tom Parry-Jones had it, and earned his team three more of the same. A full set – Lincoln, Richmond and Manchester – took Cardiff to 85, and the lead was starting to look just a little threatening. Luke Nugent had a good interruption with Lou Gehrig’s Disease. Liverpool got a tough set on South American presidents. They didn’t get any and neither did I. This meant that at the 10 minute mark they trailed Cardiff by 85 - 25.

The next starter asked about which road Terry Pratchett and Neil Gaiman’s “Good Omens” offered as evidence of the hidden hand of Satan. Now let’s be honest, even if you haven’t read it, and I haven’t, you’d still go for the M25, wouldn’t you. Eleri Evans did and brought Cardiff the points. Legislation on open government didn’t give a great deal, although I was pleased that when the quote “open government is a contradiction in terms – you can be open or you have government” saw me shout Yes Minister correctly. A couple of bonuses took Cardiff through the 100 point barrier. Daniel Jenkin-Smith correctly identified the man praised by the New York Times as the Peace King of the World as Kaiser Wilhelm II. One bonus on astronomy followed. Katherine Monks knew that the given name of the founder of Saltaire was Titus. One bonus was taken on Dublin. Liverpool were starting to claw their way back into the match, but it was heavy going for them. Sara Caputo knew that Schliemann, probably more famous for the excavation of Troy, excavated Mycenae. In a slightly controversial moment she offered Ernst Schleimann rather than Heinrich, but it was accepted. That’s fair enough, but I have seen times when an incorrect given name has seen a whole answer rejected. Whatever the case, this answer earned a set of bonuses on letters of the alphabet. These proved extremely tough, and neither of us bothered the scorer. For the music starter Roderick Lawford very quickly identified the strains of Mozart as played by the Ukulele Orchestra of Great Britain. Three more pieces played by them followed. I must say, even played by ukulele. One of them was Wagner’s Ride of The Valkyrie – or – Kill da Wabbit as it will always be known in LAM Towers. 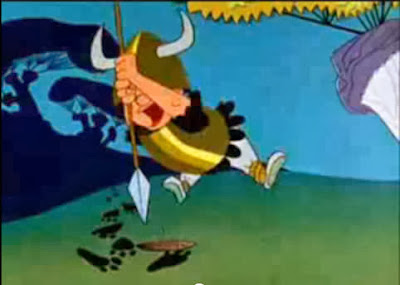 Surely this is what Wagner really envisaged when he wrote the music.

Cardiff had the lot. Tom Parry-Jones knew that the small projectile weapon giving its name to an orbital manoeuvre is a slingshot.Living creatures and their scientific names also provided a full set, and Cardiff looked ot have the bit well between their teeth at this stage, having extended their lead to over 100. Sara Caputo recognized various meanings of the word arabesque to take the next starter, and add to Liverpool’s problems. Members of the Westminster Parliament added nothing more to their score. The next starter asked for the three letter combination that is the most common ending of the surnames of US Presidents. Katherine Monks knew it was – son. Now, JP said there were 42 US Presidents. Remarkable error to make. There have officially been 44, and even if you don’t count Grover Cleveland, who was president on two non-consecutive occasions there are still 43 men who have been president. Oh well. Liverpool didn’t worry about that as they got on with their bonuses on biochemistry. These reduced the gap to 100 points – 175 v. 75 – at the 20 minute mark.

Cardiff’s serene progress towards the quarters continued as Tom Parry-Jones answered that Nigeria won their third African Cup of Nations. A full set on Rupert Graves followed. Daniel Jenkin-Smith recognized a portrait of Erasmus of Rotterdam. Didn’t he play for Feyenoord? A set of bonuses on European figures whose names are commemorated in European initiatives brought two more correct answers. Katherine Monks knew that Henry II’s queen was called Eleanor. This took Liverpool into three figures. Quantum Physics only brought one more correct answer. Daniel Jenkin-Smith was on the right lines with his answer to the next starter – recognizing Monticello as Thomas Jefferson’s house, but sadly he offered the last 4 letters as celo. Easy mistake to make. Sara Caputo really didn’t get hold of the question, and that one went begging. Chris Spencer knew that am toast is an anagram of stomata. A UC special set on words ending in – ngue – took Liverpool to 120. Nobody knew a set of words where the German and English cognates are spelled identically. Kathryn Monks recognized a description of Agatha Christie’s The Murder of Roger Ackroyd. One bonus reduced the gap to 65. Could Liverpool possibly come back? Theoretically there was enough time, but it would need full sets. Nobody knew that escape velocity is about 40,000 kmh. Tom Parry- Jones pretty much sealed Cardiff’s victory by correctly identifying Norwich as the UK city with the largest population that is located wholly east of London. Bonuses on andro words took the total to 215. Chris Spencer took the next starter on the formula for the volume of a cone. I didn’t do much with the set on an algorithm, and Liverpool , who knew a lot more about it than I did, struggled as well. Nobody knew about the Puerto Rico trench. Tom Parry-Jones knew that if you combine the two letter domain names of Spain and Sweden you get esse- which is the latin for – to be. Good, quick shout. A bonus on Italian art finished the scoring, and it was a comfortable win for Cardiff by 230 to 145. Bad luck Liverpool, but at least you have that first round match to prove to any doubters that you are a team of some substance. Well done Cardiff. That performance was by some distance better than the first round against Exeter. Very best of luck in the quarters.

Rather chatty from the start this week. When Roderick Lawford offered Elgar he smiled and remarked “Your field – you had to get it.”
There was nothing for about 10 minutes, then he enjoyed the M25 question – chuckling and saying ‘very funny’.
He gave in to laughter again on hearing the ukulele version of Kill da Wabbit, observing “Yes, it’s magisterial, isn’t it!”

In computing a nybble has 4 bits.
Posted by Londinius at 00:37

I agree that this was a surprising result going on first round score alone. Of course, there were always going to be questions about whether Liverpool could stand up to a better team on the buzzer, having not really been challenged on it first time around.

In the event, it was a close match on the buzzer, and it was the bonuses that won Cardiff the match: they managed a very good 22/35, while Liverpool could only manage 11/30 (and incurred two penalties too). That's what won them the match.

So, we're off for Christmas now. We'll presumably resume with SOAS vs Reading in the New Year.

Hi Jack
Thanks for the stats. I did think that Cardiff were doing well on the bonuses - that confirms it.

4 bits are usually a "nybble" rather than "nibble", the joke being that they are rather less than a byte.

Ah, thank you for that - I'll change the post now.