My first thought when looking at the line up for last night’s show was the Rob Deering would be the out and out winner, with the others vying for second place some distance behind. Rob Deering, as well as being a stand up, is a quizzer. In fact his first ever adult TV appearance was on William G. Stewart’s Fifteen to One. He has also won a sleb edition of The Weakest Link, without getting any of his questions wrong. So there was no doubt in my mind that he’d be the pick of the bunch anyway in GK, but also I was sure that he’d leave nothing to chance with his specialist. To be fair, he didn’t Answering on the 6 novels of Jane Austen, he ripped through 12 questions in 90 seconds giving a correct answer to every one of them. Now, the only realistic hope that the other contenders had going into the show was that Rob would underperform on the specialist round. Well, to paraphrase bad western films – they only had two chances – slim chance and no chance – and slim chance had just left town.

I wasn’t previously aware of Amy Willerton’s work. A quick Google revealed that she is a model/beauty queen, probably best known for appearing in a recent series of ‘I’m a Celebrity – Get Me Out Of Here’. Fair enough. Her specialist subject was Anne Boleyn. Fair play to her for taking such a traditional Mastermind subject – according to her inter round chat with John she is a big fan of the 16th century one-time Queen consort. Takes all sorts, I spose. Now, following Rob’s round, the other GK rounds were going to be put in the shade anyway, but actually Amy’s round wasn’t that bad. She had obviously put some work in, since some of the questions she actually got were the more difficult ones in the round. Nonetheless 6 wouldn’t put her in contention at half time.

I will have to apologise to Andy Bell, our third contender, since, until he told us before his GK round, I had no idea that Erasure are apparently still going strong. Well done. I managed 6 on Rob’s round on Jane Austen, 5 on Anne Boleyn, and again, 5 on Andy’s round on Blondie. Ah, Debbie Harry – sorry, I was getting all unnecessary there for a moment. Andy levelled out at 6 – again, a decent enough score, but not one that gave him any chance of being in the shakeup at the end.

Finally Jason Watkins. Now, if you’re thinking – Jason who? – well, let me tell you. If you saw him, you’d know him. Jason is one of those very fine character actors we seem so well blessed with in these isles. Never the top of the bill – although never down among the wines and spirits either – he’s one of those actors who producers rely on to do a fine job time and time again. Jason was answering on the actor/manager David Garrick. He did a good job too – 8 points off 90 seconds, and in another show, on another day, he’d have still been in the shakeup at the turn. As it was though, this was a one horse race.

Before the one horse left in the race got a chance to work himself up to a gallop, though, we saw Amy Willerton return to the chair. Look, she’s obviously making hay while the sun shines – doing the rounds of the various opportunities open to slebs, and nobody should blame her for that. But GK is not her thing, and she scored 2. Andy Bell achieved respectability by adding 8 to his own total. Well done. Jason went even better, getting himself into double figures, with 10 for a total of 18. Rob, though, as I knew he would do, ripped his own round to shreds, adding a relatively effortless 15 to finish on 27. 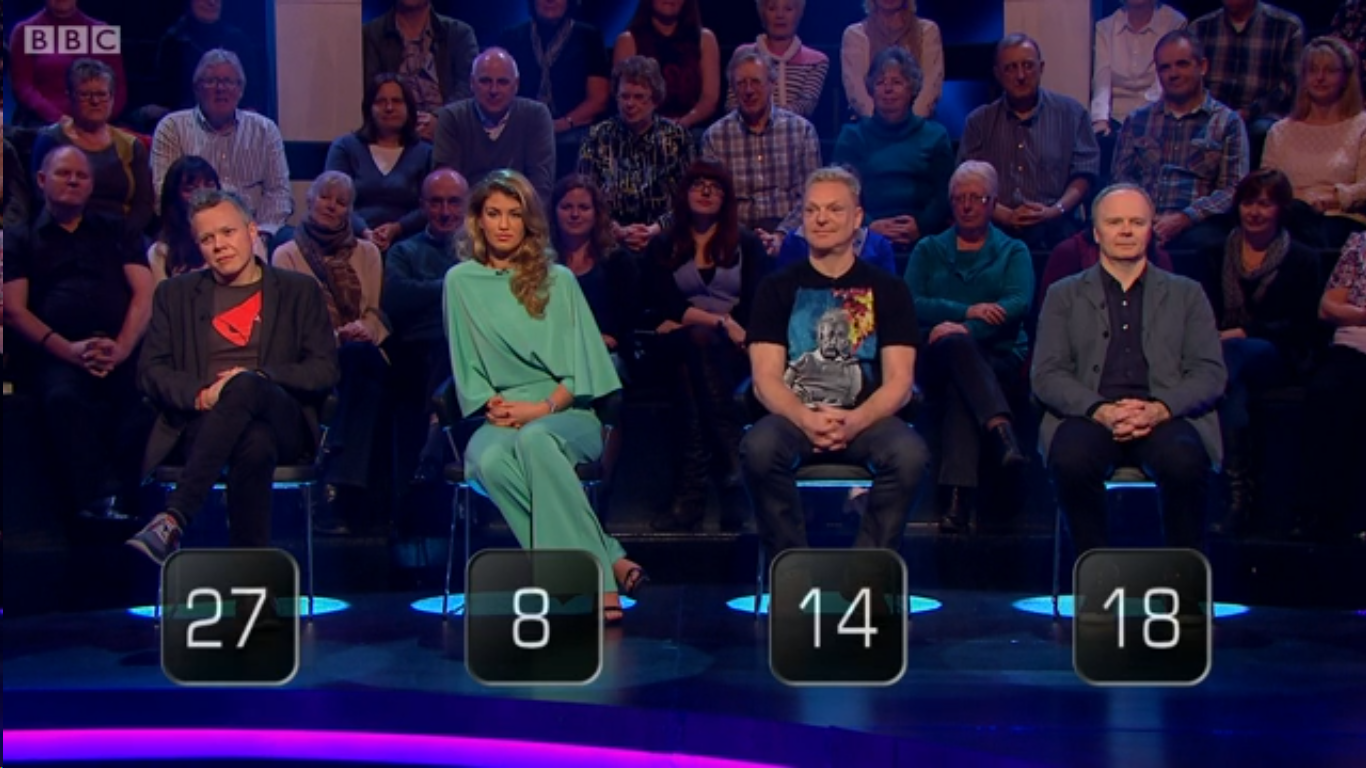