Well, another sleb show, and after this one the production team must be worrying that they’ll be getting a knock on the door from the National Society for the Prevention of Cruelty to Slebs. I’ll say more about that later on.

The show often invites broadcasters from BBC Radio, CBBC and CBeebies to take part, and first into the lists last night was Mary Anne Hobbs. I wasn’t previously aware of her work, but a quick google revealed her to be a BBC Radio 6 broadcaster. It also revealed that we were born in the same year – and I have to say that she is, without wishing to appear ungallant, wearing a hell of a lot better than I am. Mary Anne’s specialist subject was the late great Barry Sheene. By jingo she knew her stuff as well. 9 points, and only a stumble kept her away from the magical double figure barrier. A good round.

Neil Fitzmaurice is one of those people whose name you might not know, but whose face you probably recognize straightaway. Well, anyone who had a hand in writing Phoenix Nights has my respect. Neil was answering on the films of Robert De Niro, and that’s a hell of a wide subject when you consider that he’s made getting on for 100 of them. All of which probably goes some way towards explaining why Neil was unable to squeeze his way past 6 points. Not by any means a score to be ashamed of, but there was a rueful look on his face as he left the chair, and he surely thought that his chance of taking home a piece of glassware had just disappeared.

Katie Thistleton was the seemingly obligatory CBBC presenter in this particular show. Her subject was The Life and Times of Rachel Green. If that name doesn’t mean anything to you, well, basically Rachel Green was the character played by Jennifer Aniston in Friends. Now, I can already hear the naysayers preparaing their green biros for this one. My 2007 heat of regular Mastermind was leapt upon as an example of the show’s so-called dumbing down because Stacy Mitchell on the same heat chose the Life and Career of Jennifer Aniston. Well, here we a contender not only taking Friends – but only one of the main characters. All I can say is that things change for the Sleb shows. Leeway has to be given with specialist subjects – with good reason too, as we would see later. Having picked what I found to be the easiest of last night’s specialists, at least Katie did justice to it, scoring 11.

Finishing the round was dear old Johnny Ball. Johnny’s position in the pantheon of Children’s TV greats was secured with his brilliant Think of a Number TV series, and its successors. Later on in the show Johnny would reflect ruefully that nobody has come along to make such programmes for children since. He’s probably right, but then who else could do it? His specialist round was on Michael Faraday. He struggled manfully with it, but a misfiring recall system didn’t help, and he levelled out with 6.

Neil Fitzmaurice, freed from the pressure of being in a position where it was realistic that he might actually win the show, gradually relaxed into his round. Picking up speed in the second minute he managed to break through the double figure barrier to notch up a decent round of 11, to finish on 16. Johnny Ball’s misfiring recall did him no more favours in the GK than it had in the specialist round, and indeed he did confess to being in panic mode. He fought his way to 5 points for 11.

Now for the cruelty to slebs. At the halfway stage it really was a two horse race between Mary Anne and Katie, who were way ahead of two gents. Mary Anne returned to the chair, and . . . well, there’s no nice way of saying it. She got one right in her GK round. So now the worst that Neil could come was 2nd. Katie returned to the chair, and she actually did better than Mary Anne. She scored 2 points. 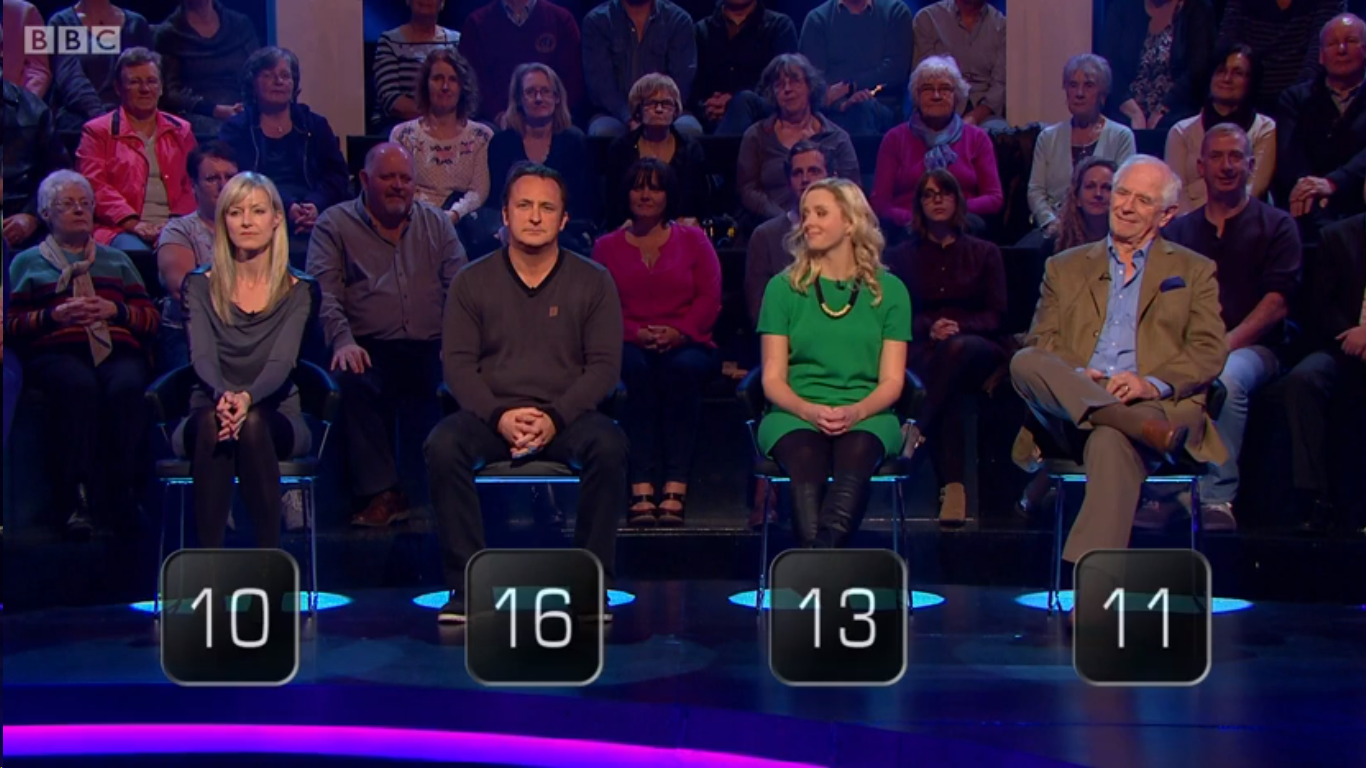 Wise words as usual Dave. I'm reminded of something Paxo once said to a losing team on an edition of Xmas UC; he told them they hadn't been obliged to take part, and they were good sports for doing so, even though they had lost badly (IIRC, I can't remember for sure).

Seeing celebs struggle on quiz shows is one thing, but hopefully they will have had fun. If they've been talked in to doing it and weren't all that keen in the first place, that's a different story.

I mean, look at the Xmas UCs we've had so far: (SPOILER ALERT) both losing sides were utterly trounced, and were still smiling at the end of it. They were clearly there for fun and hadn't been talked into it.

Pointless always gives money to the charities of all celebs who participate; I would like to think Mastermind would do the same regardless of how well the celebs do.

Sorry, that was longer than I'd planned.

That's the point - we just don't know. We have to take it on trust that all of those who took part were very happy to do so, and I do hope that they still managed to enjoy their experience. It's not the same as for the sake of argument being on Christmas UC - there you are a team, and if it doesn't work out, well hey, it's the team's fault, not one individual's.

Have a great Christmas, Jack

Oh, and I'm almost 100% certain that the fee for appearing on the show which would go to the slebs goes to their nominated charities.

Hi Dave, hope you and yours had a good Christmas! Couldn't help but notice that the subject of a single character from Friends is not without precedent.

For twas only in the last celebrity series that Jordan Stephens (of the group Rizzle Kicks) did "The Life and Times of Ross Gellar" from the same show.

I can't speak to the reaction then of course, and I wouldn't be totally surprised if we saw another of the characters used for a subject on next year's show.

I forgot about that! Well, chances are that a significant number of the people who take part in sleb Mastermind aren't sitting around all day thinking about what they'd do as a specialist for the show, so I guess that the Beeb are quite helpful with the suggestions.

If it gets to the Life and Times of Gunther from Central Perk, mind, we have a problem.