First off was Ore Oduba. Actually I have seen Ore presenting sports reports before, but also he’s the John Craven of the 2010s, presenting Newsround. His specialist subject last night was David Beckham. Well, yes, we all know that the difficulty level of the Sleb specialist rounds is not as high as it is for contenders in the regular series, not should it be, so it’s not that much of a boast that I managed 5 of these. Ore doubled this, scoring 10, and remember that these specialists are 90 second rounds, so anything in double figures is a great round. Well done.

Second up, and one of two real ‘A’ listers in last night’s show was Olympic Winter Games 2014 Gold Medal winner Lizzy Yarnold. Now, Lizzy’s round illustrated what I would think must be a quandary for the production team. You see, while it might provoke a certain amount of schadenfreude amongst a certain cross section of the audience, I’m quite sure that the team don’t actually want to see a celebrity suffering in their round. After all, they are doing the show out of the goodness of the hearts, for their chosen charity, and really don’t deserve to feel humiliated. So the team probably do feel a duty of care towards their slebs. How hard, then, I wonder, did they try to persuade Lizzy out of taking such a wide subject as The Archers 2000 – present? The round just didn’t work for her – and despite putting a brave face on it she looked most uncomfortable as the round progressed.

Not so Alex Riley. Now, I can’t say that I was familiar with Alex’s work, but a quick google revealed that he’s a TV and radio presenter who’s been around for a while, presenting this and that (stop me if I get too technical). Now, when I was about 11 or 12 there was a guy down the road who had a Triumph TR7 in British Racing green outside his house morning, noon and night, and I must admit, for a while I though he was the bees knees. I guess that Alex maybe had a similar attachment since he took all the Triumph TR models as his specialist subject. He did so jolly well, too. 11 points off 90 seconds is quite an achievement. I think Michael Edwards was the only one of these that I managed – mind you they never asked the name of the bloke down the road with the green TR7.

Our final contender – well – now our final contender really was a genuine celebrity. Ken Dodd. It’s probably fair to say that Ken Dodd is the last of the great stand up gag men I grew up with in the 70s, and whether you like that sort of thing or not, you have to give the man some respect – for staying power if for nothing else. Oh, and you maybe knew that his song Tears was one of the highest selling singles in the UK in the whole of the 1960s as well. And that he’s acted in and lectured upon Shakespeare. Sorry – this is not actually a meeting of the Ken Dodd Appreciation Society – but I was amazed and delighted to see him having a go. Talking about comedians I grew up with, Ken’s round was on Theatre Comedians since 1950. Ken had just the one wrong, not knowing that Frank Randall used to thrown his false teeth at hecklers. Now that’s entertainment. This gave me my best round of the night, as I only had two wrong, the Frank Randall one, and I didn’t know that Arthur Askey had been a choirboy in Liverpool Cathedral.

As for the GK – well, I don’t know whether John was under orders to bump Lizzy’s score up, but he refused to accept Pass for an answer on one, and kept badgering her until she got the right answer to take her up to 5 for the round, and 8 in total. Look, the lady has an Olympic Gold Medal, she doesn’t need to prove anything to anyone. Doddy did slightly better, adding 6 to his score to go to 15. Realistically we were left with a two horse race. Which, without wanting to be horrible in any way to Ore Oduba, it soon became clear was really a one horse race. I don’t know if GK is just not his thing, or whether it was nerves, or what, but the round didn’t come off for him, and he finished with 15, same as Doddy, although had it gone to count back Ken would have won having had no passes. Alex Riley then didn’t need a great round to win. Well, he might not have produced a great round, but it was still a pretty good one. Alex scored 14 on GK alone. Putting that into perspective, had he only scored 2 on specialist he would still have won. But that’s always the way it can work out on a sleb show. 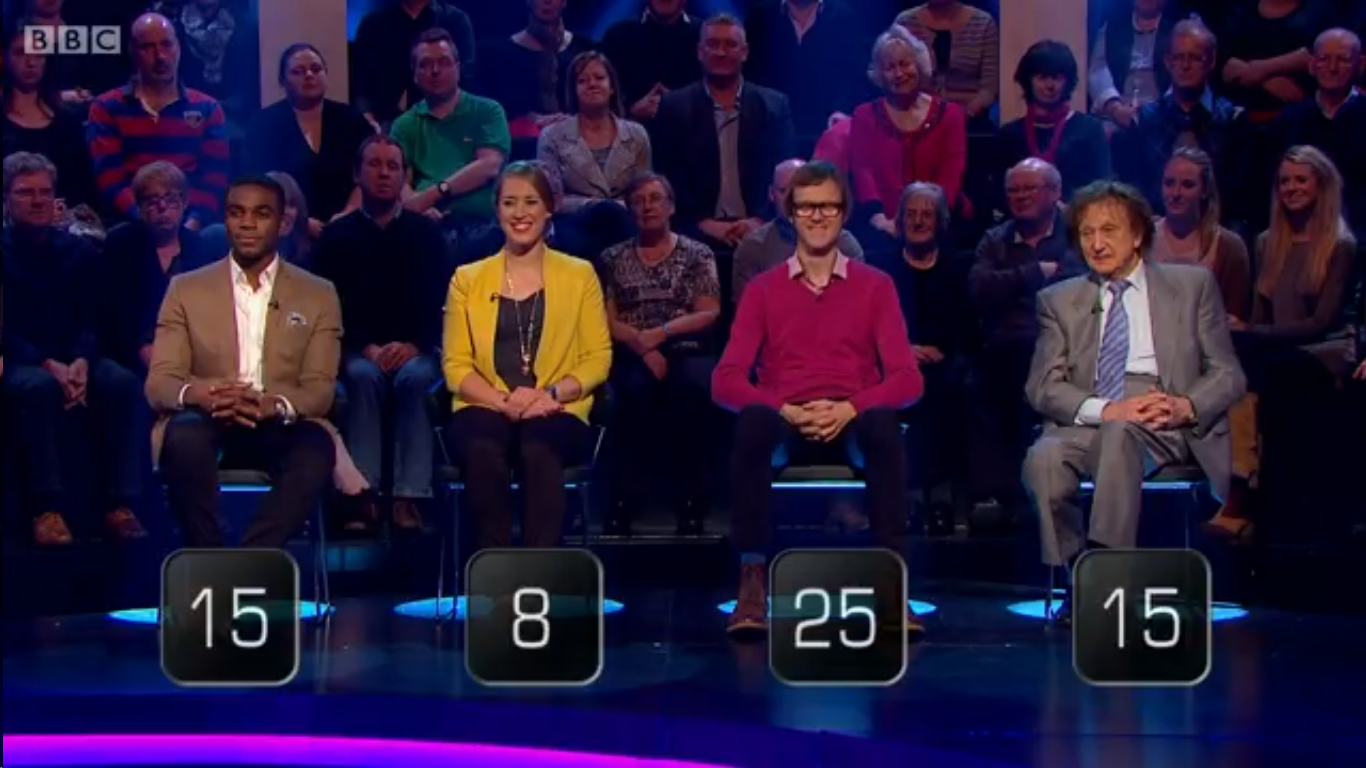 One of my Mum's friends, I think it was Sheila Creasey, used to drive a TR7, a bright red one. I was very impressed with the pop up headlights.

I saw a beautiful TR7 convertible in the supermarket carpark a couple of months ago and was admiring it when the owner returned. He expected me to ask what it was - the usual response to it, I think - and was rather surprised when I correctly identified it.

I see that on Christmas University Challenge, there will be a team representing Goldsmith's College, London in a few days. Will you be on it?

Ha ha - I wish! Didn't know that Goldies are going to be on, but I'm absolutely delighted to hear it. I think that they stopped the policy of putting quizzers on the Christmas teams a couple of years ago.