A quick check of last night’s roster of contenders – all actual celebrities? Check – well, by the standards of celebrity quiz shows, certainly. I mean I had heard of all of them before. Which meant that there were no poor old CBBC/CBeebies/BBC digital radio presenters who had been parachuted in to seemingly make up the numbers.

First up was Kate Thornton. You remember Kate Thornton? She used to present the X-Factor when it was popular. Oops, naughty boy. She’s also done stints chairing Loose Women, and was once upon a time the editor of Smash Hits. Not everyone’s cup of tea certainly, but nonetheless, still a celebrity. She was answering on George Michael, and she did a better job on the subject than I did. I managed 6 of these, while Kate took 8. I doubted that this would be enough to give her a real shout, but still a round worthy of some respect.

Tony Law is one of those comedians who is probably best known for appearances on panel shows such as 8 out of 10 Cats and that ilk. I’ll be honest, I can’t say that I’d go out of my way to watch him, but hey, humour is very much a matter of individual taste. I liked his subject, though. As an Airfix modeler in my youth (and Revell, and Tamiya, although Airfix were my favourite), Fighter Aircraft of World War 2 very much appealed. In almost a reversal of the previous round, Tony managed 5 on his questions, while I managed 7.

Steve Pemberton is best known as one of the talented quartet who conceived, created and performed The League of Gentlemen. (Alright – I think Jeremy Dyson had bowed out of performing by the time of the TV series, but you know what I mean). Steve was answering on Films of the Coen Brothers. I may be wrong, but I’m fairly sure that my Uncle, himself a bit of a quizzer, said that he would never apply to Mastermind, but if he did, then he would take this as his subject. After which total irrelevance I should record that Steve put on a good round, just missing out on double figures to turn round at half time with 9 and no passes.

You might not have recognized Harry Shearer’s face – although you would if you’re a fan of This Is Spinal Tap – but you’d surely recognize his voice from The Simpsons, or should I say, his voices. Harry was answering on the History of the NBA – that’s the big Basketball League in the USA – from 1976 – present. I only managed 2, although one of these, Larry Bird, was one of the couple that Harry didn’t get. As I say, there were only a couple of these, as he did manage to break through the barrier into double figures, finishing with 10.

This may seem like hindsight, but I honestly did say at half time that my money was on Steve Pemberton. First though we had Tony Law come back to the chair, chat a bit with John, answer a few questions, take his score up to 12, and then amble back and sit down again. Kate Thornton, who would say at the end of her round that she had feared this more than childhood, did perfectly reasonably to add another 8 points to finish with 16. That’s about the equivalent of 20 from 2 minutes, and as such is perfectly respectable. Steve Pemberton justified my faith, though, with a very good round of 16 – which by itself exceeded Tony’s combined total, and equaled Kate’s combined total. When added to the 9 he already had, this made 25. I couldn’t see Harry Shearer beating that. Actually that’s no reflection on Harry – the fact is that the nature of General Knowledge means that you’re at a disadvantage if you’re in a different country from that which you call home. Even if you’re only talking about a couple of points – and conkers was at least 1 – when you need 16 points anyway you’re going to be the underdog. Nothing wrong with Harry’s score of 11 for 21 – it would have won some of the shows in this series. 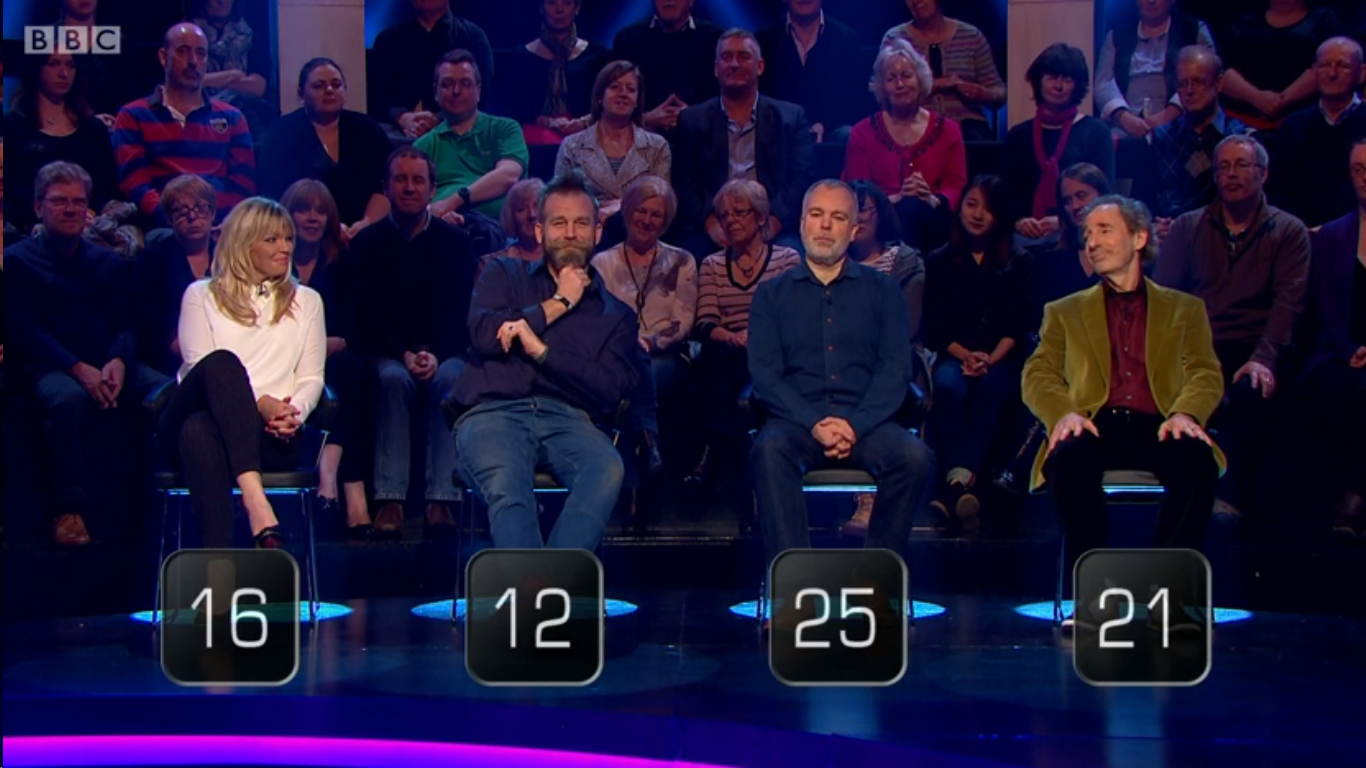 And to you Dan - all the best