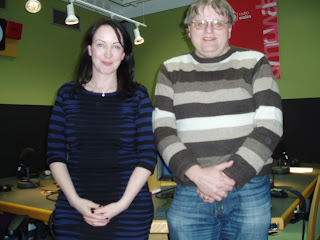 I’ll be honest, I wasn’t 100% sure of what to expect when I agreed (and believe me there was no arm twisting needed ) to take part in Jason Mohammad’s 10 – 1 radio show earlier today. I say Jason Mohammad, but the man himself is off at the moment, and the show was presented by Mai Davies. I have no idea about Jason’s quiz prowess, but I have to tell you this, from the comments and the things we talked about while off air, Mai is no slouch in her own right. Still, as I say, I didn’t know what to expect, but hey, it’s a bank holiday, and it sounded like a bit of fun.

One of the things I can be really anal about is being late for things. I’m one of those people who would rather arrive somewhere two hours early than 10 minutes late, and so I left with an hour and a half to play with for what should have been a 45 minute journey at most. I say should have, since I took a couple of wrong turnings. I maintain this was due to less than crystal instructions from AA Routeplanner, but whatever the case I arrived with about 10 minutes to spare. So that was the first obstacle out of the way.

The premise behind the show, as originally explained to me, was this. There was an article in the papers a few weeks ago stating that pubs across the length and breadth of Britain are giving up their Sky Sports in droves to take up pub quizzes to entice the punters across the threshold on weekday evenings. Like anything else, I’m sure that you can find examples to support this view, and other examples to cast doubt upon it. Still, I was asked if I’d be prepared to contribute to the show and you don’t know me very well if you think I’d ever do anything other than agree.

Well, by the time the details of the show were being settled it had been agreed that people would also be invited to phone in and try to beat me with their questions. Yes, I know. If you take part in something like that you’re risking people think that you’re setting yourself up as some kind of quiz guru – which I most definitely am not. Also, you risk looking stupid if you can’t answer the questions, and, when you get right down to it I am very beatable. But what the hell. The whole thing was just a bit of fun, and if it all went pear shaped and I got them all wrong, well, I’ve got broad shoulders.

So as for the show, well . . . it was great fun! Honestly. Mai was absolutely lovely. With regards to the questions, well, thereby hangs a tale. Lots of people tweeted in questions – but didn’t leave the answers! So they couldn’t be used. Any questions which could be asked needed to have their answers verified. Now, if you’ve ever put your own quiz together you’ll know that actually verifying your answers can be a) tricky sometimes , and b) time consuming. The thought of having to do that while making a live radio show – well, the mind boggles. No wonder I caught Mai giggling a couple of times, and saying that Chris was looking frazzled. I’m not surprised!

How did it all go, then? Well, as I said, it was meant to be a bit of fun, and that’s exactly what it was, tremendous fun, in fact. Mai kept score as we went along, with a point going to the listeners for anything I couldn’t answer correctly , and a point going to me for anything I could answer correctly. Thank heaven for some nice people ringing in and asking me gettable stuff ( for me) like “What was the world’s first gold record?”, the answer being Glen Miller’s The Chattanooga Choo Choo. With the help of some extremely sympathetic scoring from Mai – well, downright biased in my favour if you want my opinion – I was still in with a shout of coming out on top going into the last half hour. In the end I scored 2 points less than the listeners – and do you know what did for me in the end? My own daughter !

Perhaps I should explain that. My youngest daughter Jessica rang. I knew it was her as soon as Mai said that the next caller was Jess from Port Talbot. I also had a horrible feeling I knew what she was going to ask me. Several times in the last couple of weeks she’s asked me this – “Apart from Jean Paul Gaultier, which other designer has designed a special can for Diet Coke?” Every time she asks me I get it wrong, and never remember. I didn’t remember today. To Mark Jacobs, the designer in question, I can only say that I am deeply sorry, sir, and it’s nothing personal. Had I been able to answer it, then I’d have had one point more, and the listeners one point less, and we’d have been all square. On such small margins . . .

The time – three hours in all – absolutely flew. I enjoyed the whole thing immensely, and am hugely grateful to BBC Wales for inviting me onto the show. If ever you fancy doing it again guys, I am definitely up for it.

If you'd like to listen to the show, then here's the iplayer link