Get Connected - Get Quizzical Evening

Last night was the GetConnected Get Quizzical event in aid of the GetConnected Charity. Every year I give thanks to the Quiz Gods for my Mastermind win, since it resulted in my original invitation to take part in this fantastic event.

It being Half Term ( yay – Half Term!) I was able to stay overnight , and so this was the plan. Part one – drive to London from South Wales. Now as regards the actual driving part, that’s easy enough. Given fair road conditions I can drive comfortably from home to London in less than 4 hours, and that’s allowing for at least one generous stop on the way. However, the problems only really start when you get to London. These are a) driving in London is horrible ( just my opinion, and as always , feel free to disagree) and b) you have to find somewhere to park and that ain’t easy. So my plan was to use a little local knowledge. I’ve mentioned before that although I’ve lived in wales for a little over 27 years I was born and grew up in West London. So I thought that I should be able to park in one of the back streets not that far from Boston Manor tube station. Which is essentially just what happened. 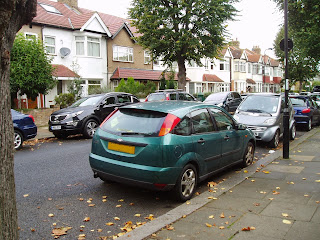 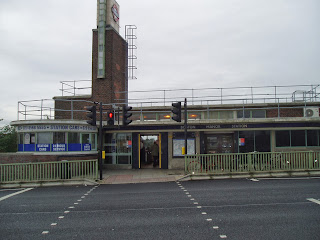 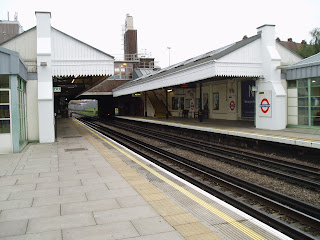 The London version of Park and Ride.
Boston Manor tube, from the platform, has the air of a quiet and sleepy country station – nice to know that at least some things don’t change.

The hotel the charity had very kindly put me up at was a few hundred yards from Lancaster Gate tube. The quickest way I could do it was changing from the Piccadilly to the Hammersmith and City by crossing the road from the one Hammersmith station to the other. It was on the train from Hammersmith to White City I had the first surreal experience of the trip. I was reading the story about the Rebekah Brooks/Andy Coulson trial, and a lady came and sat next to me. She was, how should I put it, a lady of more mature years, let’s say in her late 60s or early 70s, very smartly dressed, and to all outward experiences quite prim and proper. She leaned across me, tapped the story in the paper, and uttered one word.
“B*st*rds!”
I’ll be honest, I was so surprised that all I could do was just nod once, and we didn’t exchange any more communication until I left the train at Wood Green to walk up the road to White City to catch the Central Line to Lancaster Gate.

The hotel room, wasn’t a room – it was actually 3 rooms. In fact, an apartment in the Lower Ground Floor. I’ll be honest, for a supposedly intelligent person I can be pretty dull sometimes, and it took me quite a while to figure out that Lower Ground Floor is actually hotel speak for Basement, and you have to push the big B in the lift. 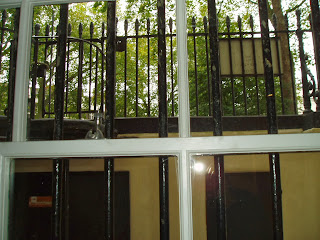 A room with a view – I told you the Lower Ground Floor is actually the Below Ground Floor.

Don't take the impression from this that it wasn't a nice room, well, set of rooms. It was actually exrtemely nice and comfortable.

I had a little while before I was due at the venue, so I took the Tube to Oxford Circus so that I could walk down Regent Street and see the lights – which I just about managed though they haven’t been switched on yet. 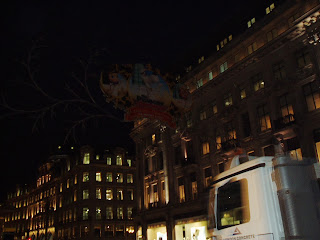 Verdict? – Could do better

From there I walked down to the Embankment. You see, I think I might have mentioned before that I have a thing about bridges. Just love ‘em. The fact is that the only bridge open to pedestrians across the Thames in London which I’d never walked across are the Golden Jubilee Bridges, so it was an opportunity to put that state of affairs right.

Thence to Floridita on Wardour Street, the venue for the evening. Many of the same stalwarts from last year were there again, my pal Dave Rainford from Eggheads, Erin and Anton from Strictly (more about that later) Phil Tufnell, Ronnie Irani,and Ray Parlour, to name but a few. Oh, and Aleksander Orlov, the meerkat aswell, although I didn’t actually see him myself.Host for the evening was Rory McGrath. 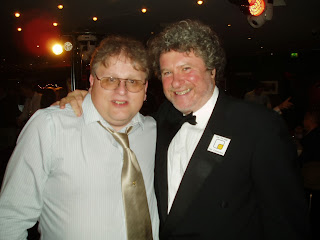 Me with Rory McGrath – top man.

I tend to say this a lot when I’m writing about these events, but what a nice guy. I did think I might catch a little bit of stick from Rory when Dave kindly informed him of my allegiance to Tottenham Hotspur, but not a bit of it. A very, very nice guy in my opinion, and very funny too.
Right – you heard it here first. As they did last year, Anton and Erin did a demonstration dance – this year the Tango – which was quite remarkable given the tiny amount of space that they had to work in. Now, if you’re a devotee of the show – and why not? – then you might have been wondering why Erin hasn’t been taking part in this year’s series. Well, I asked her , and the reason is that she’s expecting. Many congratulations to her and her partner ! 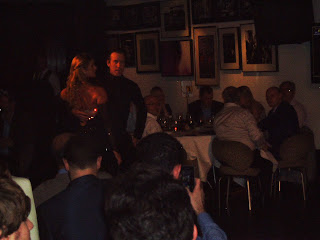 The quiz itself was as much fun as ever. I was grateful to attract bids for each of the 4 rounds for which I was available, as did Dave, and Tuffers, and , well, everyone. I was 20 for 20 after the first two rounds, but started dropping a couple of points in sport, and as for Entertainment, well, let’s draw a kindly veil over that. All I can say to team 2 who bid for me is that I am very sorry.

Normally I have to rush away after the quiz, but since it’s half term I could stay in until about midnight. The lovely Alex, who first got me involved in the event, and thankfully has kept me involved ever since, had arranged for taxis to pick up Dave and me at midnight. The problem was that Wardour Street was closed by this time. So Alex checked her phone, and found she had a number of missed messages from the taxi. She rang them, and asked which street mine was parked in. First she couldn’t understand which it was, then she asked the driver to spell it, and then she asked the driver to text it to her. There was five seconds silence, followed by the sound of Alex’s voice, raised in frustration and desperation, saying,
“What do you mean you don’t know how to text!?”
That finished me off. I was still laughing by the time I got in the cab about ten minutes later.

The only thing I was really worried about today was whether I the car would still be there when I got back to Boston manor this morning. There was no reason why it shouldn’t have been, after all I checked and double checked the road where I’d parked it to make sure that there were no restrictions there, but you know how it is. When there’s nothing to worry about you have to manufacture something. It was there, and it did start . . . eventually. Three and a half hours later, that was that. Back home safe and sound.

What can I say? I know how fortunate I am to be invited to do things like this, and I loved it. A fantastic evening, which raised more than £76,000 for the charity. Everyone’s a winner.
Posted by Londinius at 09:01