I didn’t go to the quiz in the Dyffryn Arms last night. John’s in Hong Kong, and my Mum and Step Dad have been staying the weekend with us. Bearing this in mind I thought that I might earn a few brownie points by not going out. Mum and Tony left about 11 o’clock this morning. Parting is such sweet sorrow.

Actually that reminds me. ‘Sweet sorrow’ is an example of an oxymoron – a figure of speech which combines two apparently contradictory terms in a way that makes sense. A year or two ago I explained this to a class, pointing out that Juliet means that although she is sad that Romeo has to leave, it is still sweet because she knows that he will come back tomorrow, and when he does he will have arranged for them to be married, so that is what makes the sad thing sweet as well. OK. When the essays came in I have to admit having a chuckle or two when I came to the explanation of one enthusiastic young shaver, which went something like this : -
“ Juliet says that parting is sweet sorrow, which is a good example of an ox you moron. “ Well, quite.

As I say, Mum and Tony have gone home, but I’ve been thinking about something Mum said. The subject of my quiz obssession came up, as it often does, and Mum passed a comment along the lines of – well, you’ve always loved quizzes. Even when you were a little boy and I bought you that “Tell Me “ quiz for your birthday. - I twigged on to what she was talking about, and much as it pained me to admit it, she had a point. 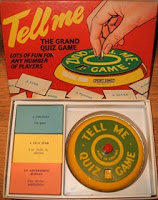 I don’t have my Tell Me quiz game any more, more's the pity, but I found this picture of one on the net. I had it for my 10th birthday. Although it was a robust enough little thing, I think I trod on the spindle and broke it off, but I repaired it using one of the long bolts from my meccano set. Basically it was a brilliantly simple idea, which was first made in the mid 30s, and still going strong in the 1970s when I had it. The spinning wheel has a little window. On the base are the letters of the alphabet. You pick up a card form the set which comes with the spinner, and it will say , for example a lake – a country – a car etc. Then you’d spin the wheel, and whatever letter it reveals, you have to name an example of the thing on the card that starts with that letter. If you manage it, then you keep the card. Whoever has most cards at the end of the game is the winner. Sometimes it really is true that the simplest ideas are the best.

As a point of interest, for a lesson warm up at work I sometimes play something very similar with the kids at school, and it absolutely works a treat.

It’s difficult to assess how original this might have seemed in 1933. Because it has had imitators since. In fact I might never have been given it, but a friend of mine was given a game called “Watchamacallit” or something like that for his birthday. This was basically the same game, although as I recall there was a brightly coloured board with pictures instead of all the cards. I raved about it to my mum, who bought this instead – which to my mind was even better. At the time Merit also made a game which was almost identical called Spin Quiz, although that looked plasticky.

Oh, I suppose that it wasn’t even state of the art in 1974 or whenever . Still the spinner itself was very appealing. It was quite weighty for what it was, and would spin for ages if you gave it some welly.

The gameplay was simple and brilliant. It won't keep you going for hours at a time, but it's not designed for that. It's a 10 minute game par excellence. As I remember the cards also had the word printed in French as well. So while you’re playing, you’re also learning French vocabulary. Fantastic. You don’t get that with your iphone apps nowadays.

I love this game, I used to play it at my Grandparents' house. You've made me think how well it would work as an iPhone app.

I wouldn't be surprised if I'd still got mine somewhere - and if I have, it will be in pretty good nick. What a good game.

I used to play a similar game when I was young with my siblings. It was called 'Stop the bus'.
Basically, you were given 7 'titles' (boy's name, girl's name, food, animal, country etc...) One person runs through the alphabet in their head, once told to stop they say the letter and everyone has to give an answer relevant to the title beginning with said letter. The first person to finish shouts "Stop the bus" and pens must go down. You get 10 points for a unique answer and 5 for one which another person has.
I really enjoyed it, it was simple (only requiring a pen and some paper), fun, albeit frustrating and filled a rainy day easily.
So if you're stuck for ideas with some kids (or even adults - make it a bit high brow!), you could give it a go!

Yes, kids at school call that version Boy Girl. Having said that, it was a lot more prevalent when I started 25 years ago, and seems to have died the death a little. Shame.

Here's one of my other favourite starter games. This is a spelling vocabulary one. You put a letter on the board. The first pupil has to add a letter to it. They must be building a word ( no proper nouns ) . If they complete a word - any word, then they're out. The next person must either add a letter, or challenge. If they challenge, then the last person to go has to say a word beginning with those letters. If they are correct, and the word has so far been spelled correctly, then the challenger is out. If they can't, or their word is so far incorrectly spelled, then the challenged person is out.

Sounds complicated, but it's not really, and gets them thinking. It's quicker with smaller groups, obviously.