In my preview of the semis my predictions basically boiled won to two things – namely, that whatever happened, Trinity would reach the final, and SOAS wouldn’t. That’s a bit harsh isn’t it? Sorry. Well, the fact is that last week, Trinity did fulfill the first part of the prediction. The SOAS team would be doing their very best to ensure that the second part didn’t come true. Maeve Weber, Luke Vivian-Neal, James Figueroa and their captain Peter McKean, beat surprise package Southampton in the first round, and then knocked out Reading in the second. In their own first quarter final match they comprehensively beat Cardiff. However the might of Trinity overwhelmed them in their first quarter final, before they won their semi-final slot against a resurgent Queen’s University Belfast. Don’t think that I was underestimating them in any way, please, but I just fancied that the Somerville team had a little more firepower. Sam Walker, Zach Vermeer, Chris Beer and their skipper Michael Davies eventually overcame Clare, Cambridge in a close contest in their first quarter final match, and defeated our boys from Southampton to win their place in the semis. Along with Trinity they were the only other unbeaten team left in the competition.

So much for the niceties. The first starter asked about the treaty banning activities in Antarctica. Chris Beer, so good on the buzzer in the quarters, was in far too early, allowing James Figueroa to take first blood. A set of bonuses on Malthus were all gettable, and they managed 1 of them. For the second starter it was a question of wait, wait, wait and then race for the buzzer when you heard the words “British singer who died aged 27 –“. James Figueroa won that race, to earn a set on much quoted incidences of the word ‘famous’. I had the same two of these that the team managed. Sam walker held his head in his hands after buzzing in too early on a chemical element. Had he waited, and heard the words – which derives its name from the Greek for colour – he might well have had chromium, which instead fell to Maeve Weber. Bonuses on astronomy were by no means easy, and SOAS managed one of them. Nobody knew the term folk etymology which denotes widely and wrongly held beliefs about derivation of certain words and phrases. Now, if you’re asked for a pope of the 16th century, you’ll be right more often than you’re wrong if you answer Alexander VI/Roderigo Borgia. Zach Vermeer gave us the former, and was right to do so, thus bringing his team’s score back to where it had been at the start of the contest. They took themselves into the black with a couple of bonuses on St. Pancras Old Churchyard. The picture starter showed a graph representing the distribution of seats in a recent election in a European country. Zach Vermeer knew it was Spain. Three more of the same brought 2 more bonuses. So just after the ten minute mark Somerville had clawed back quite a bit of SOAS’ early lead, although SOAS still led by 55 to 30.

I didn’t really get the next question, but Chris Beer did with Mayard. Bonuses on Phillipe Starck took Somerville to 50. Thus warmed up now, Chris Beer knew that clues to the words circle, Piccadilly, Victoria and others gave clues to the names of London Underground line names. Ford Maddox Brown brought a full set, and Somerville were now 20 points ahead of SOAS. Some geometry maths thing came next. Nobody had it. The next question asked for a frequent collaborator with Dickens. I thought it was Wilkie Collins – oh, alright, I knew it was Wilkie Collins. Chris Beer had a decent stab with Bulwer-Lytton, but lost five for his pains. Maeve Weber came up with the goods and earned bonuses on information dispersal. One correct answer took them back to level pegging with Somerville. The music starter came next and Chris Beer recognized Saint Saens’ Danse Macabre. More pieces of music intended to invoke the macabre brought Somerville another five points. I’ll be honest, the only one I recognized was Bach’s Toccata and Fugue. (The ‘Rollerball’ Music). A quote from Stalin brought Sam Walker a starter, and Somerville a set on ophthalmology. They didn’t convert any of these into points. I surprised myself by knowing diopter. After a miscue by SOAS, Chris Beer knew a language family named after the Urals. Bonuses on squirrels in literature were enough to take Somerville’s score up to 115. SOAS, on the other hand, were back on 55, and allowing for miscues had managed just the one starter and one bonus in the previous ten minutes. Unless they suddenly found a turbo charged finished, it looked as if Somerville were on their way to the final.

Chris Beer was first in with the word never, beginning a famous Churchill speech. Operas based on Shakespeare plays limited me to 1 – if it ain’t Verdi I don’t know it – but Somerville had 2. Nobody recognized a Botticelli painting for the second picture starter. Now, if a question contains the words ‘dramatist’ and ‘architect’ then go for the buzzer, because it’s Vanburgh. Chris Beer did just that to reap the points. Three more renaissance paintings of feasts or banquets brought them nothing. Quiddity, a great word, was missed by both teams. The Tunguska explosion brought Luke Vivian-Neal his first starter of the evening. Hampton Court (it was once said to me that it can be very painful if you get your hampton caught, and it took me twenty minutes to explain to the person I was with, who was from Newcastle, exactly why I was laughing) gave them 2 bonuses which took their score to 85. Zach Vermeer knew that Jacobites called the younger brother of Bonnie Prince Charlie – incidentally himself the only famous man ever named after three sheepdogs – Henry IX. Bonuses on words which can be typed using only the characters on the middle row of a qwerty keyboard – a good UC set if ever there was one – brought another 10 points. Now, I didn’t know the river mentioned in the next starter, but I knew that the Zagros Mountains are in Iran. Luke Vivian-Neal had that one. A maths thing followed. By the time I switched back on, SOAS hadn’t got any of them either. A nice question about hexadecimal followed – if you write a number (I forget which) in hexadecimal it comes out as the abbreviation for Facebook. Fair enough. That man Chris Beer had it. The UN brought a full set of bonuses. Peter McKean came in very early to identify a set of prequels to take SOAS into triple figures. That was it for the contest. SOAS finished with 105 to Somerville’s 190. Well played both. As I thought, Somerville had just a little too much firepower, and once they found their range, were too quick on the buzzer for SOAS. But well played anyway, SOAS – no shame whatsoever in reaching the UC semi finals. As for Somerville, many congratulations. We’ll preview Monday’s Grand final in a later post.

For the tube starter, JP just looked at Chris beer for a second, without saying anything, as if angry he’d been interrupted. I don’t know, maybe he was enjoying that set of clues. I’ll be honest, question masters tend to get annoyed when I do answer the question before they’ve finished asking it in league matches in Bridgend. I try to hold myself back, but sometimes the thrill of the game just gets too much.

The memorial above the grave of Sir John Soane in St. Pancras Old Church Yard is believed to have inspired Gilbert Scott’s design for the phone box. Have a look at this picture of it - 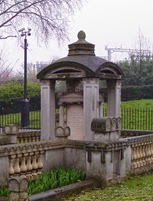 - you have to say, there’s a definite resemblance.
Posted by Londinius at 01:43

I wouldn't exactly call this a close match, but it was another decent performance from Somerville, and a deserved victory. SOAS still did OK considering, and they should definitely be pleased with their progress this series.

On the bonuses, Somerville converted 19/33 (with three penalties) and SOAS 8/18 (with just one penalty).

So, on to the final next. It should be a very good match on Monday, whichever teams wins. Whoever does so will deserve the title.

Hi Jack,
Yes, sometimes the form book doesn't lie, and this match certainly went the way that I thought it would. SOAS have had a great series, but they had reached as far as they could.

I've been collecting my thoughts about the final, and although there is certainly a case to be made for Somerville my gut feeling is that Trinity are the more likely of the two teams to do it.