In his comments about my preview of the Mastermind Grand Final – to be shown later tonight – Neil Wright asked " I wonder whether anyone has been brave enough or confident enough to leave their best subject for the final?"

This is a fascinating question. For me, it is making an assumption that contenders do actually have a ‘best’ subject. Speaking from my own experience, maybe this is going to sound arrogant, but I never anticipated doing worse on any of my specialist subjects than I would do on the others. To that extent I never had a 'best' subject. My personal feeling was that if I picked subjects according to the criteria which I'd chosen to apply - about which I have written in the past - then I ought to be able to do equally well in all 3 subjects if I put in the time and effort to learn them. That's pretty much how it worked out for me - on my four specialist subjects in regular Mastermind in 2006 and 2007 I scored 14,14,15 and 15. Each of these were two minute rounds. In the context of the show at the time, none of these were Hall of Fame scores, but all of them were good enough to give me a shout on General Knowledge, and none of them were produced without a significant amount of preparation and work on my part.

All told I actually learned 6 subjects for Mastermind Specialist rounds - the 4 that I’ve already mentioned for the regular shows, and then 2 more for Champ of Champs - I was stand-in for the Grand Final so had to prepare for it, even though the odds were against me needing it. You could definitely say I was lucky that I found all 6 of my subjects equally interesting. I'd like to think that it came down to my own foresight in choosing the right subjects, although that's just my opinion, and as always . . .Still, I can certainly see that out of three subjects you might well have one which you are far more interested in than the other two. You prepare equally well for each one, and you believe - possibly correctly - that you can do equally well on each subject, but there's one you are looking forward to over the others. Do you save it, in the hope of getting to do it in the Grand Final, or do you use it in your first round to make sure that you get to do it?

My choices for 2007 worked out like this. I chose to do the Life and Career of Henry Ford because I had a brilliant biography of the man and his company, by Robert Lacey. I knew that becoming deeply acquainted with the relevant sections of the book again would be no hardship. The fact was also that I had nominated this as my semi-final subject for 2006. In 2006 I lost in the first round, although I was one of three highest scoring runners up. There were no repechage places in the semis at that stage in the show’s history, but I was invited to the semis as a stand-in. I wasn’t needed, so the way I looked on it was that I knew that the production team of the time liked Henry Ford as a subject, and they’d have had to have procured a set of questions on him in case they were needed for the semis. So when I reapplied in 2007, I thought it might make me more appealing if they still had the question set, it would mean one less for them to produce. Did this have any influence on my selection? Probably not, but I did get on. My choice of the life of the Prince Regent for my semi-final subject was an easy one to make, since it had been my nominated final subject for the previous series. So once again, I knew that it was a subject that the team were happy with. As for me, again I found the subject very interesting and had a number of good books to work from. With regards to London Bridge for the final, well, again I had books, and I found it very interesting. There was no reason why it had to be my final subject, other than the other two had to come before for the reasons I’ve already stated.

Having said all that, I do clearly remember talking to Stewart (Cross) before our final, and he said that he wished he had opted for his semi-final subject for the final instead. It was easier to make observations about comparative specialist performances in first round, semi and final in my day, since each round was 2 minutes long. The picture today is muddied a little by having 90 second specialist rounds for the semis now. Still, I did decide to have a look at the winners’ specialist scores to see if, by and large, they tend to have their best specialist performances in the final rounds. Here is the table: - 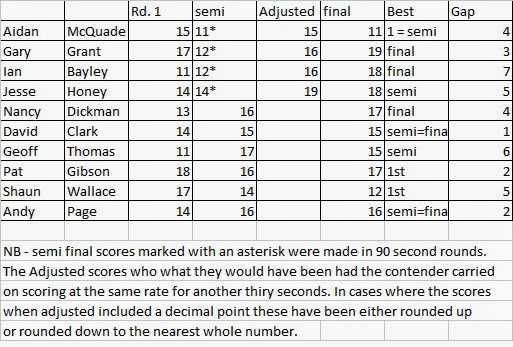 Now, I should explain that the table only includes the Humphrys era winners (not including tonight’s, of course. Honestly, I have no insider knowledge as to the outcome of tonight’s final.) mainly because I don’t have detailed stats of Magnusson era performances. Since 2010 the semi final specialist rounds have only been 90 seconds long. I applied the mathematical formula of dividing these semi scores by 3, and then multiplying by 4 - this is why there is an Adjusted column in the table. It at least gives us an idea of how good these 90 second rounds were when compared with each champ’s other performances.

We’re only working with a small number of contenders here, and if you had the time to do this for every Grand Final contender of the Humphrys era it’s quite possible that identifiable trends would emerge. With a larger survey like this the results would certainly be a lot more statistically significant, and you could do it. The figures are all available on Weavers Week, for example, although whether the time and inclination are also available is another question entirely. You can’t say that the champs all saved their ‘best’ subjects (if they had one) for the final, but you can’t say that none of them did either. What is significant though, is that none of them had a weak specialist subject. Of the 30 scores, 21 of them are 15 or over, and in fact only 4 of them are less than 14.
Posted by Londinius at 03:07

I'd have thought that these days the most important consideration is which subject is most likely to get you a foreign holiday. If only one of them involves a hot country or a long-haul flight, you'd be bound to leave that for the final, regardless of how well you might do with it, surely?

I've only watched the first fifteen minutes of the final so far, but I'm already consumed with envy, seeing Daniel standing on the stage at Bayreuth and Brian walking around some lovely warm war memorials. In my day, all we got was the train fare to Broadcasting House - I'd have loved a weekend in Brno looking at the Janacek Museum...

As luck would have it, I have all these numbers to hand and they show that for the 11 seasons of the Humprhys era, the average SS scores for the 64 finalists, by round are:

I used point per minute to equalise for the differing round lengths - you could convert to a "standard" 2 minute round by simply doubling them.

I also looked by year as to which round had the highest & lowest averages and this shows that:

By contrast, the final saw the lowest average in 7 seasons, the 1st round was lowest 3 times and the SF was lowest just twice.

I think the conclusion would be that there isn't really any statistically significant different in performance between the 1st round & SF, but players do tend to score fewer SS points in the final.

I guess the next question is whether this is due to the questions being more difficult, their being more pressure in the final, or simply that the players have used up their "best" specialist subjects in the previous rounds?

I think it is right that, given sufficient time, dedication,the right books and a subject that you can maintain an interest in without getting bored, then at this level it should be possible for everyone to cover their specialist subject properly. However, deficiencies in any of these factors may result in you favoring one subject over another.

You may also find that your subject is just too broad and there are too many sources to cover. I suppose in that case you might be able to negotiate a narrower subject but I don't suppose that would be well received. It always used to be understood that, by going for a wider subject you got easier questions. Nowadays, every set of specialist questions seems to contain quite a few that might be attempted by people with a good general knowledge so there is much less point in going for too wide a subject.

I'd like it put on record that I chose Wagner because it was his bicentenary year. In actual fact, I would rather have done Verdi, as it was also his 200th birthday, but unfortunately Sian West had got there first in the previous final. I wanted a couple of composers because at some point I'm planning another go at Counterpoint, which is the one I've always really wanted to win.

I certainly didn't expect the trip to Bayreuth. I joked about it after the semi, but expected somewhere in London - Sian had ended up to the Colliseum in St Martin's Lane - and we did talk about various UK venues. In the end, we went to Bavaria because both Covent Garden and the Royal Albert Hall wanted silly amounts of money. To film in the lobby.

Now, I'm not a huge Wagner freak - not like some - but the Festspielhaus was very special. They gave us a free run, unchaperoned, no time limit, access to the auditorium, stage, pit and boxes, and even put some lights on for us, and as far as I am aware, they didn't even want a fee. It was out of season, but even so. Top people, and enough to encourage me to go back some time for a performance (although probably not the Ring).

Well done, Daniel. I remember immediately after the semi that you were wondering whether they might send you to Bayreuth and was pleased to see that they did. All the inserts for this final were impressive but yours was particularly memorable.

I wonder how many people are involved in filming these inserts and is it a bit of a perk for the production staff as well? Perhaps, if I have another go, I should try taking the Seychelles as my subject for the final and see how that goes down.

Neil - there were four of us in Bavaria - Mark Helsby, the producer (last minute stand-in, I gather, for someone who was due to give birth), Paul the cameraman and Emma, the local fixer who met us at the airport with a hire car and generally looked after interpreting, negotiating, etc. We needed an overnight stay, but it certainly wasn't an extravagent use of licence-payers' money - I think the "allowance" for dinner was just £16! We did the filming in one day, it was hard work but, I hope, all worth it in the end.

I liked your idea too, though. Rome would have been very cool.

Not that I am complaining, but I thought I'd add my two pennorth. For my final the only one who went far to make his film was Stewart - who was doing the History of Venice. I get to go to the park outside my old school, London Bridge (in London) - not Arizona as I'd hoped! - and the Museum of London after hours. And . . . I LOVED it!