Right, then, let’s have a look at the table of qualifiers for the semi-finals, shall we? 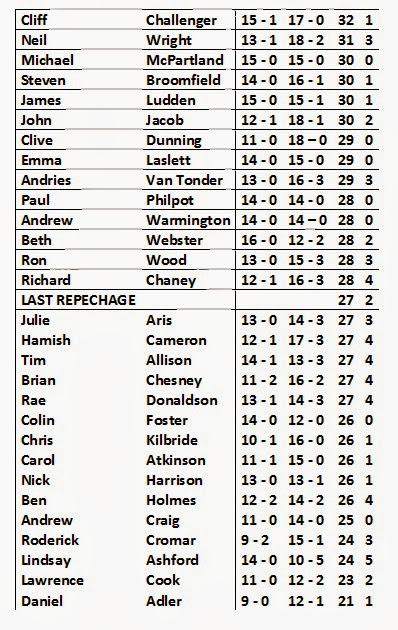 Now, the first thing to say is that the picture is slightly complicate by the question marks over the repechage places. I have taken it for granted that the same rules have applied this year as last, that the top 6 runner up scores qualify regardless of whether they were second or third in their heats. You might notice that I have given one place to Last Repechage. This is simply because we had three contenders each with 27 and 2 passes, and I don’t know how they will allot the place. Somewhere in the back of my mind I seem to recall someone once mentioning that the next measure would be the number of wrong answers given, but I may have dreamed this.

Well, allowing for that uncertainty then, what can we deduce from this table? Well, I always like to see a high GK score, and it’s nice to see that every qualifier achieved double figures in GK. You have to say that Neil Wright, John Jacob and Clive Dunning all impressed with rounds of 18, as did Cliff Challenger and Hamish Cameron on 17. A special word for Hamish. I may be wrong, but I think that is his 4th time in the semifinals, and I really hope that this time he makes it to the finals – nobody deserves this more. I think he has an excellent chance. A special mention for Beth Webster as well. Beth has contested the first round on a couple of previous occasions, and this is the first time she has reached the semis. Looking at her performance in the first round she has to have a chance of the final this time round, and I’ll be keeping my fingers crossed.

While we’re doing shout outs, a mention for Paul Philpot too. Paul is, as I’m sure you know, a dedicated quizzer and blogger, and I’ll be hoping to see him make the Grand Final. I had a lovely email from Roderick Cromar after his win as well, so I’m hoping that he’ll do well. Clive Dunning is a contributor to the blog, and he looks to have a great chance of maybe even going all the way to the title – while wishing in no way to scupper his chances by lumbering him with the Clark tip.

Of course, you just don’t know who is going to be drawn against whom. The team’s first and foremost concern is to make a good show, and this means making the best combination of subjects that they can. This often results in one or two ‘top heavy’ semis, where two or more of the highest scoring first rounders are pitted against each other. Another feature that makes this series difficult to call is the move towards unnecessarily long winded questions in the specialist round. With only 90 seconds allotted to specialist in the semis a contender has even less time and opportunity to adjust to a bad start, which again suggests that the best performers in GK have the best chance of getting to the semis.

One point of interest from looking at the table is that it shows just how remarkable heat 23 was. Three contenders from that one heat qualified – and not only did they qualify, they all posted scores within the top 10. Who knows – if they are all in separate semifinals we might even see all three of them contesting the final.

I’m not going to spoil anyone’s chances by tipping them to get to the final. Some will doubtless do it through preparing thoroughly for their specialists, and keeping their head in their GK. Others will carry all before them in the GK. If I knew who they were, well, I’d have a go at predicting tonight’s lottery numbers while I’m at it. I wish all 30 of them the best of luck, and hope that they enjoy the semifinal experience as much as I enjoyed mine.
Posted by Londinius at 10:16

John Humphrys did imply at the end of Heat 23 that the 3rd placed person was likely to make the semis! In the notes to contestants for my series (2009) we were told that the final tie break would be audition scores.

Thanks for that. It was certainly the case last year that third and even fourth place finishers were still eligible for semi slots if the score was high enough, but that was a change from the previous policy. When Jon (Kelly) brought back the repechage slots he did limit it to second place finishers - he told me so in an email when I enquired.

The audition scores certainly makes sense, and seems a fair enough way of doing it.

I think this is Hamish Cameron's eighth go ...

*waves up at Cliff from the bottom of the table ...*

Regarding your point about every qualifier scoring double figures on GK.

I think this reflects the change in emphasis between SS and GK over the past 2 series.

The change to longer SS questions has been well covered but I also think that there has been a change to the GK questions as well.

I'm not sure if the questions have become easier or shorter, but certainly GK scores have becopme higher in the past 2 seasons.

If you look at the heat averages for the past 2 years, you get:

The previous 2 years (the first 2 since they moved to 2 and a half mins for GK), gives:

So you can clearly see that while total scores are broadly the same as before, there has been about a 1 point switch from SS to GK, such that GK now accounts for the majority of the total score (for the first time in Mastermind history I imagine - as historically SS was an even bigger contributor, back when the were of equal length. For example in the year you won Dave, SS made up 57% of the average score in the heats.)

I think the patterns are too consistent for this to be chance and I think there has been a deliberate strategy by the new production team to make GK more "valuable" - I assume in an effort to make the show more accessible and attract more viewers?

Apologies for the long-winded ramble!!!

It's also interesting to note that only one of last year's semi-finalists scored less than 10 points on General Knowledge in their heat.

And that was the eventual champion of the series, Aidan McQuade.

Oi where am I in your repechage list: love Peter Russell?

Peter - does that mean that YOU are the elusive last repechage spot?

If so - how did they decide between you all? Was it on audition scores?

Heat 8 was pretty good as well. 3rd and 4th on the leader board and if Peter Russell got through then three people from that heat qualified as well.

You're right! What were the chances of that happening? Well, it isn't totally unprecedented. In David Edwards' 1990 series I think it says in I've Started So I'll Finish that all of the repechage contenders came from the same heat!

Jeff, sorry I didn't comment earlier. I'm interested by your stats, and I can't say that I'm totally surprised. Nice to see the stats from the SOBM. D'you know, the highest score in GK in the whole series was 15. Several contenders managed it in the first round, Stewart Cross did it in the semi, and thankfully Sandra Piddock and I both managed 15 in GK in the grand final. There were some very scores in SS, though. My scores in SS in 1st round, semi and final were 14, 15 and 15. That's perfectly good - good enough to win those shows anyway, but not amongst the top scores of the series. Hamish had 18 in the first round heat, I think, and Stewart 17 in the semi final. Come to think of it, Derek scored 17 in the final on SS.

I think that there has been a change to GK in the last couple of years too, although I think it's maybe a little more complicated than it looks. what I think is that the bottom and top scores have been squeezed a little closer. We haven't, for example, seen a 20 or a 20 plus for some time now. Now don't get me wrong, such a round would be a superb round - but off 150 second it is possible, and we did see a few once the 2 and a half minute rounds first came in.


According to "I've Started So I'll Finish", David Edwards was one of two in his heat to go into the repechage semi-final in 1990; but there was a heat in 1993 in which all the contestants reached the semi-finals.