Let’s have a look at the table, then. 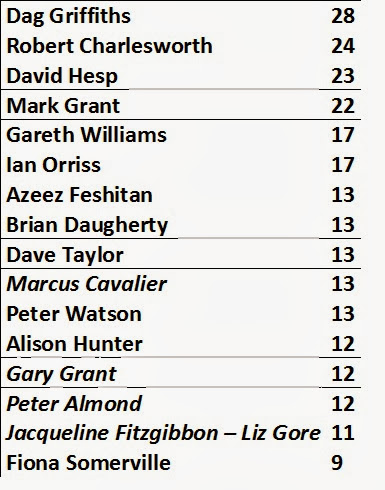 Well, if you go purely by first round scores, then it looks fairly clear cut. Dag’s first round performance was, as our own Gary Grant has said, awesome, in fact, almost Bayley-esque. But the nature of BoB is that nothing is ever quite cut and dried. Robert, David and Mark all put in superb performances of their own during the first round. You’re never going to make good money by betting against Mark Grant in a quiz. Speaking of Grants, as well, 2012 Mastermind champion Gary Grant is in the mix as well, despite losing out on a tie break to Dave Taylor, another very good quizzer who’s been there and bought the T-shirt, as it were.

BoB has a habit, like Mastermind, of throwing up some very tough, top heavy semifinals. It would be harsh, to say the least, if Dag, Robert, David and Mark were all thrown together in the same semi-final, but it could happen. It’s certain possible that two or even three of the above could be in the same semi. Now, don’t get me wrong, this can make for at least one high quality and very exciting semi-final, but it makes the pundit-prognosticator’s job very difficult indeed. Mind you, so does the uneven nature of the starters that contestants get asked. Of course, some would say that the nature of the beast is that only the very, very best can be guaranteed to pick off the vast majority of starters they might be asked, and there’s some truth in that. Look at the list of winners, certainly over the last two decades. Alright, some are stronger than others, but there’s no mugs there at all.

OK, so here it is, the moment that all the contestants are doubtless dreading. Who am I going to tip? Well, I’m not going to ruin anyone’s chances by saying that they are going to win. However I will say this much. Dag was outstanding, really outstanding in his first round, and if he can repeat that level of performance nobody will fancy playing him in the semis. Anyone who can get into the 20s in BoB is a top level performer, and so Robert, David and Mark all served good notice of intent. But then there are some good, competitive quizzers further down the list as well. I just hope that we don’t see any contestant knocked out by having a set of starters which are noticeably harder than anyone else’s. I know that it’s all in the ear of the behearer, but I’m pretty sure that I beheard it happen in at least one of the heats.
Posted by Londinius at 12:01

I THINK from listening last year that all the semis include 3 heat winners + one runner up, which would prevent a semi with the top 4.

You know what - you're right! Thinking back to my own go in 2009/10, the same rule was in operation then. D'Oh! Thanks for pointing that out.