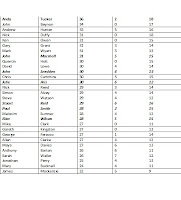 Click on the table above and it should enlarge a little. Basically it gives you the 30 semi finalists, ranked in order of total scores in Round one. The column on the far right also gives the Gk score for each .

You know, predicting who is likely to make it through from the semis is never an easy thing to do. For one thing, I don't know who has been drawn against whom. It's a feature of Mastermind that there is often at least one 'top heavy' semi, where three or even four contenders for the whole series are pitted against each other. Then there are the contenders who have a one off brilliant performance in the first round, which they can't repeat in the semis. So, allowing for that, who has caught the eye ?

Well, you have to say that the top four on our list all look highly impressive. Andy Tucker with a brace of 18s was the pick of the bunch. However his 18 was matched on GK by Nick Duffy, who has already been to the Mastermind semis before, as has John Beynon, and our own Gary Grant and Gareth Kingston. Don't underestimate the advantage of experience in this game. I'll be honest, I can't see any dangerous looking mid table lurkers this year. You might remember that last year Ian Bayley wasn't one of the top scoring players in the first round, for example.

Looking at the table I'd say that our chances of another lady champ are pretty slim this year. Only 4 ladies have qualified for the semis this year. Repechage slot winner Julie Aris had the highest score of the 4, but this was based on a perfect SS round of 18. The chances of repeating this in the semis aren't huge, and her GK of 12 suggests she will struggle to qualify for the the final.

Pick a winner ? Hand me a pin and a blindfold. Yes, Andy Tucker's first round score was fantastic and marks him out as a potential champion. Yet it's no more impressive than Brain of Britain Iwan Thomas' first round last year, and he didn't get to the final. There are 13 contenders who have scored 30 or more, and I'd expect most of the 6 finalists to come from these. But then again, there's another 4 on 29, and 3 on 28. It's all very close.
Posted by Londinius at 17:03

A few weeks ago, I asked the question: is this series of a worse standard than last year's? This was just based on a subjective feeling I had that we hadn't had as many truly impressive R1 performances as in 2010/11.

So, using your handy tables from this year and last, and winning myself the 2012 award for Having Nothing Better To Do On A Saturday Morning, I have worked out some average scores (for the winners only), which are:-

So, actually, in terms of those of who have gone through, there isn't that much of a difference - maybe there have been some better specialist performances than GK this year, but not to any great degree. So it looks like I was wrong. And on that bombshell....

I must admit that I was a little surprised when I put this together last night - I hadn't realised there were quite so many scores of 30 and above. Why I shouldn't have thought so is a mystery mind , since this is a score from 4 and a half minutes, which puts 30 into the tricky but do-able bracket. Which is not to do down anyone who managed 30 plus, such as your good self.

Last year I had no prior knowledge of how the final would pan out, but I couldn't believe that Ian wouldn't get there, and having been pulversised by him in my BoB final I knew that he was going to be the man to beat. Likewise with Paul Staples - BoB runner up, well known and respected quizzer, he was always going to be there. Likewise Diane. This year, it's not quite the same, although to be fair, we have you - OC runner up - AYAE2 semi finalist - previous MM semi finalist ( forgive me if I miss out any credits ). John Beynon - BoB runner up, previous MM semi finalist. Ken Owen - AYAE2 contender, well respected quizzer. Gareth - CIU champion and previous MM semi finalist. I'm not scuppering anyone's chances by picking them out for a spot in the final just yet. There's no point anyway until we see who's against whom in the semis.

Do your comments mean that you DO know how some of the rest of *this* year's series pans out? I do hope not; I always think that those who don't want to know the results in advance should be allowed to watch the series 'blind'.

Obviously, I know how at least one of the semis goes, but based on the results in so far I'd have to agree it is impossible to call....first, last year's R1 results were a poor guide to the final outcome; second (and with all due respect to Gareth, Ken, Quentin and even perhaps me!) the only top, top quizzer in this year's show is Andy Tucker - although you could make a case for John Benyon, he's never (AFAIK) competed in the national events so it's hard to compare him to others - and third, it is all very close statistically. Luck of the draw - literally - and getting a flier in the 90 seconds semi-final SS will probably count for much.

Lastly, as far as spotting Eggheads in the audience goes, keep a close eye on the background during my semi!

No , and I'm sorry if I gave that impression. I meant that I didn't know how things happened, but I was still able to predict Ian, Paul and Diane as finalists. I honestly do not know any of the results of the semis - and I'm grateful to friends such as yourself for not telling me the results in advance.

Further to Gary’s post on the comparison of the scores of the semi-fnalists over the past 2 years, here is a more complete breakdown;

So it would seem that there is very little difference at the top and bottom end between this year and last, but it’s in the middle that we find a gap – there were a lot less scores in the high 20s this year and a lot more in the low 20s – maybe this has driven the perception of lower scores this year?

Thanks, Gary, you are too kind.

Having come to this relatively cold (UC The Professionals being my only quiz TV before 2010), I'm just enjoying testing myself, and being impressed by the talent of those I've encountered.

I've learnt that a lot depends how the questions fall. If they suit then you can look your best, if not then it's painfully hard. I'll stop before this becomes cod-Kipling!