Back in the mists of time – well, July, anyway, I posted about quiz based board games, ostensibly asking whether anyone still plays Trivial Pursuit any more. Helpful comments from readers led to me buying The World According to Ubi – and everything which was said about it is right. It is complicated at first, it is a bit infuriating, and it is very compelling, and a little bit addictive.

OK, fast forward to last Sunday. Escorting Mrs. C. around the boot sale in Bridgend as is my wont, I happened to notice this lurking beneath one of the tables. 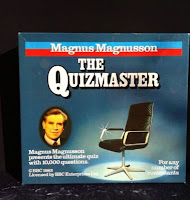 Released in 1983 by Spears Games in conjunction with the BBC this one somehow passed me by at the time. It’s obviously cashing in , for want of a more appropriate phrase, on Mastermind, but couldn’t use the name for a game because the bearded chap with the rather attractive oriental lady had got in there first. The seller assured me that it was all there, and the money went down on the table.

1983 meant that this one got right in on the start of the Trivial Pursuit boom. I myself never heard of Trivial Pursuit until 1984, and that was from some Canadian guys I met on Rhodes while I was backpacking round the Cyclades and Dodecanese that summer ( said he, trying and failing miserably to make himself sound all windswept and interesting.) What’s this game like ? Well, it certainly avoids a couple of potential pitfalls. For one thing there’s no board. For another , the rules and instructions fit onto one A4 sheet of paper. If you need a thick booklet to explain how to play a game, chances are that it’s too complicated. Basically it’s all about cards. The box is full of question cards. There are ten categories of card – which are Famous People – The Animal World – General Knowledge – The Arts – Sports and Games – The Sciences – Stage and Screen – The World – History – Common Sense. I like that last one. Each category is colour coded – Hmm, heard that before somewhere. Each card contains 10 questions. each category contains 100 cards, which even my elementary arithmetic can work out as 10,000 questions. It works like this – Each player takes the turn to be the question master for one complete round. The challengers in turn decide which category they want their questions from. The first question on each card is the easiest, and therefore worth 1 point – the 10th the most difficult, and worth 10 points. A player who answers correctly continues with his/her go, up to three consecutive correct answers. If a player gets it wrong , the question passes across to the next player, and so on. Passed across questions are always worth just two points whatever the level of difficulty. The turn then goes to the next player as well. It’s not a million miles removed from Brain of Britain in this way. The winner is the first player to amass 50 points, but here’s the rub. It must be made up of cards from at least 7 categories, with no more than four cards from any one of them.

Well, that’s only the first way to play. The booklet does suggest others. You really need the category stipulation. I’ll give you an example of the questions. The first 10 are from a card in the General knowledge category, and the second is a card picked randomly from the Common Sense category –

General
1. Where does the poncho originate ?
2. Is soap made from oil, fat or wood ?
3. What is the first book of the Old testament ?
4. What is peculiar about a shark’s teeth ?
5. What are Lady Day and Michaelmas ?
6. Who gave the Torah to the Jews ?
7. What is the equivalent of the Red Cross in the Middle East ?
8. What are the names of the tubes that connect the nose with the ears ?
9. What is sarsenet ?
10. What are the thongs called which hold a falcon’s feet ?

Well, the questions are certainly no worse than in the original Trivial Pursuit, as far as I can see. I have to admit I’ve quite enjoyed this , and it’s worth £1:50 of anyone’s money.
Posted by Londinius at 06:57

This was one of my all time favourite games when I was at school. I used it to run various school quizzes and family events at home. The many different colours of cards and difficulty levels - as well as the generous number of questions - made it last a long time.

The later Waddingtons MasterQuiz game was also a lovely game. It had many different bits of kit - category chips, game boards, scorepads - that lent itself to around seven different ways of playing. It also was an excellent source for making up your own games.