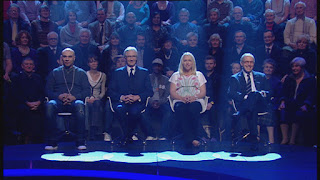 Its only been a few days since last Monday, but I have to admit that by last night I was more than ready for anything resembling a serious quiz, so the return of sleb Mastermind was welcome. In this first show we had the treat of actually having 4 celebrities. That’s a little unfair, but its not uncommon for one or two of the line up to be what we in the trade call a ‘whothe’ell “. So, on with the show. First up we had Goldie. Goldie was competing on behalf of the SOS Children’s Villages. The inter-round chat is back, and there are, I think, good reasons for keeping it in the sleb show. After all, these people are giving up their time and effort for no personal gain, so at least they deserve a little air time. In Goldie’s chat John Humphrys paid tribute to his wide portfolio – musician, actor, artist to name but a few. His subject was the films of PT Anderson. Maybe you haven’t heard of him, but I’m sure you’ve heard of some of his films, like Boogie Nights , Magnolia, and There Will Be Blood. Very good on the broad narrative sweep of the films themselves, Goldie fared slightly less well on details and technical stuff such as the name of Anderson’s cinematographer. He scored 10.

Paul O’Grady followed Goldie to the chair. His nominated charity was Save the Children. Paul’s subject was Gypsy Rose Lee. In the chat he explained that he felt an affinity to the famous American burlesque artiste since they had both were animal lovers, and they both had to become used to standing on stage with very little on. He followed this with an anecdote about an experience with the Danish fire service which surprisingly managed to stay suitable for a pre watershed audience. I got the first question – what was Gypsy Rose Lee’s real maiden name – because it’s a bit of an old chestnut. I was out with the washing after that. Paul wasn’t though, and he managed 13, a good score.

Sparks was the charity being represented by Gail Emms. Together with Nathan Robertson, Gail Emms is our most successful ever badmnton player, having been world champion and Olympic silver medallist. Although several months pregnant she has lost none of her competitive edge, having recently played against the lads from Man Utd. – who she beat at her own game. She showed a fine competitive edge in this game too, answering a magnificent 19 questions on Gavin and Stacey, the highest ever individual round in Sleb Mastermind.

Loyd Grossman, our final celebrity, eschewed the more traditional choice of a children’s charity, to represent the churches conservation trust. He was offering a very traditional mastermind subject, though, in the shape of 18th century English art and artists. You wouldn’t have blamed him if he’d been completely blown away by Gail Emms’ performance, but he kept his head, and answered every question to avoid passing, to give himself 14 points and an outside chance.

So by halfway it looked as if two of the contenders would have a job even getting up to 19 to match Gail Emms’ first round score. In Goldie’s GK round we had a question about the establishment opposite Gracelands – which is called Heartbreak Hotel . Also there was a reminder that in the ‘Luton Airport’ ads featuring Lorraine Chase, it was actually campari that she was drinking. Goldie needed 10 to get into the lead, and never quite looked like doing it. He scored 7. Paul O’Grady dashed off 4 points very quickly, and then 2 points to get to 19 much more slowly. Alas, even if Gail Emms had never scored another point she would still have beaten him on pass countback. He didn’t get any more. So he was left to, as he put it, hate himself in the morning for failing to remember that it was The Kinks who had a hit with Dedicated Follower of Fashion.

The competition, then, could begin again in earnest as Loyd Grossmann sat down for his final round. It seems as if 18th century art doesn’t do it for JH, since his inter round chat concentrated entirely on Mr. Grossman’s accent, and his interest in food and haute cuisine. Hau hum. If his chat was less than inspiring, however, his GK round was superb. Yes, its probably fair to say that the level of GK questions in the sleb version is somewhat kinder than the normal series, but nonetheless getting only one wrong was seriously impressive quizzing. 18 points and no passes put him in with a decent chance.

Gail Emms then needed 13 and no passes just to force a tie break. To put this into perspective, in last year’s series only 2 slebs managed 13, and only one, Phillippa Gregory managed 14. So Gail had gone from short odds favourite to unfancied underdog in the space of just a couple of minutes. She gave it a good old lash, and came close, scoring a creditable 12 for 31. So well done Lloyd Grossmann. Its just possible that this might not be the best performance of the whole series, but if anyone wants to beat it they'll have to go like the clappers. Good show.