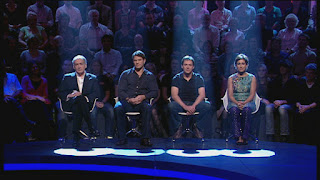 Show three, and surely we weren’t going to see the same kind of pyrotechnics that we saw in the first two shows of this series ? Tonight’s lineup were : - venerable newsreader Alastair Stewart, naturalist and wildlife broadcaster Steve Backshall, Radio One’s Comedy Dave Vitty, and original Apprentice runner up and broadcaster Saira Khan.

Alastair Stewart, whose chosen charity was Action for Children, kicked off tonight with a popular culture subject in the shape of The Rolling Stones. Somehow I would have always thought of Mr. Stewart as more of a Frank Sinatra or at a pinch, an Elvis Presley sort of a guy, but he knew his stuff on the Stones. It wasn’t a perfect round, but it wasn’t bad, and 14 and no passes would surely give him a chance.

The Really Wild Show’s Steve Backshall gave us the charity with the longest name tonight, as he was donating his fees to Deeping St. James Exotic Pet Refuge. He didn’t offer us a wildlife subject, though, instead settling for Judo. Unlike Judo, there’s no way in Mastermind that you can use your opponents’ own strength against them, and so Mr. Backshall was left to his own strength to score 11 and no passes.

‘Comedy Dave’Vitty , poor chap, was taking the subject which had been chosen by his Radio One Listeners. They obviously have a good sense of humour, since they chose the unlikely, and rather unentertaining subject of British Motorways. Comedy Dave presents a show with Mark ‘Chappers’ Chapman, who competed last year, but this subject gave him little or no chance of matching Chappers' total score of 25. Representing Cancer Research UK, he scored 6.

Saira Khan is living proof that sometimes to be runner up on a reality TV show can bring you every bit as much success as actually winning, if not more so. Representing the charity Children in Need, she offered us the life and works of Coco Chanel. I knew that Coco Chanel’s Christian name was Gabrielle – so did Saira. Unlike me, she also answered another 9 , although I think she knew a few more than that, but just couldn’t quite get them out.

So by the end of the SS rounds we could see that this was much more of an ordinary sleb MM show than we’ve had in this series so far. When Comedy Dave returned to the chair JH commiserated with him over the subject that his listeners had chosen. Despite being a self confessed nerd about service stations, he found learning for this subject to be ‘mind numbingly boring’. Oh well, he fared better in this GK round, getting into double figures. He ended with 17, a score which JH described as very respectable. Saira Khan explained how much she wanted to earn £50 million to set things up for future generations. I will confess it. I like Saira. I thought she had a few strokes of genius in the Apprentice, and I like her CBBC show Beat the Boss. But for a smart cookie, which she undoubtedly is, she didn’t cover herself in glory with a mid round pass spiral, leading to a round of 6.

So then to all intents and purposes it was Steve v. Alastair for the trophy. Steve agreed with JH that he had the perfect job, after describing his joy at finding a foot long rat. Oh well, it takes all sorts. He was three points behind Alastair after the first round, and so he needed to really pour on the points if he could. He earned a laugh for suggesting that the 1986 film “Blood Simple” was the first film of the Marx Brothers rather than the Coen brothers, and finished with 22 points, thus equalling his specialist score. So Alastair only needed 8 and no passes to be sure of a win. 12 points and 2 passes brought him a comfortable win in the end, with a total of 26 and 2 passes. Which incidentally made him the first person in this series of sleb MM to be in the lead after the specialist round, and to go on and win the whole show. Well done sir.