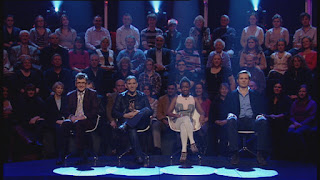 Show 4 of the series brought 3 familiar faces, and , since I’m not a devotee of Emmerdale, one not quite so familiar face. First into the chair was former King of the Jungle Joe Pasquale, representing the British Forces Foundation. Joe’s subject , Vampires in films, was actually a much wider one than you might think, and Joe’s performance , up until the last question, was amazing. However, just as he was tottering on the brink of a perfect round, he passed on the very last question. He didn’t get through quite as many questions as he might have done, asking for a mid round repeat, but nonetheless 16 and one pass was formidable.

Tony Audenshaw was the contender I knew least about tonight. Apparently he plays a character called Bob Hope in Emmerdale. His chose charity was leukaemia research, and his chosen subject was British Birds. This, as I recall, was the subject that Mastermind Finalist Richard Smyth took in last year’s first round, where he scored 17. Tony Audenshaw didn’t quite manage this, but his 14 and 2 passes put him well in contention with Joe .As an aside, one of his only two passes was the question about which bird has the latin name “buteo buteo”. It’s a buzzard. However there is a bird also which has the latin name – subbuteo ! Its absolutely true, and its where the name of the football game comes from . How ? Well, its because subbuteo is the latin name of the bird called the Hobby !

If you look in the OED under the word ‘nice’ it will probably say ‘Diane Louise Jordan’ . She was the mainstay of Blue Peter when my oldest kids were viewers, and I have a lot of time for her. Representing Action for children, she answered questions on the American TV series Brothers and Sisters. I’ve not heard of this series, let alone ever seen it, so I’m afraid I make no other comment except that Diane managed to score 10 points.

Roger Black offered us the Life and Music of James Taylor in support of the Treloar Trust, which is a charity which aims to provide first class education and support for young people with disabilities. Roger Black was an integral part in one of my favourite sporting moments, when he ran the first leg of the 4x400m relay in the 1991 world championships, where Kriss Akabusi anchored GB to an unexpected gold. So a formidable competitor then. As ably shown by his 17 and no passes.

So, once again it seemed that just maybe we were about to witness a sleb breaking through the 30 point barrier. At the halfway stage you’d have put your money on the thoroughbred Roger Black. However there was a dangerous outsider in the field . It wasn’t Diane Louise Jordan, though. After explaining that she is tone deaf, and has to have her microphone turned down on Songs of Praise if she starts to sing along, she managed another 5 and 2 more passes. Tony Audenshaw discussed the changes in Emmerdale over the years. All sorts goes on there, apparently. Well, Tony Audenshaw turned out to be the surprise package in tonight’s show , as he showed very few areas of weakness rattling off 16 points and only 1 pass, to take him up to the magical 30 points.

Lets back track a minute. At the half way stage you would have said that it was a two horse race between Joe and Roger, with Roger looking the odds on favourite. Suddenly, though, this had change. It was now a race to see if either of the front runners could get past the hefty target set by Tony Audenshaw. Joe Pasquale was the first to try. He rubbished his own chances in the chat, and with some good reason, since he soon started to flounder, and so began to play it for laughs. To be fair he got he biggest laugh of the series so far when he suggested that Joseph Ratzinger adopted the name Pope Kevin when he became pontiff. Still even Joe couldn’t resist taking advantage of some of the very easy questions he was asked, and his final score was 21.

So only Roger Black could beat Tony Audenshaw. Before the round started, he explained how his silver medal in the 1996 olympics represented the peak of performance he could have managed, his career coinciding with a candidate for the greatest runner of all time, one Michael Johnson. This was a tortuous round, where he crept rather than sprinted towards the target. He’d reached 28when the buzzer went, allowing him to get the next question right, but still end up a point behind Tony Audenshaw. To be fair to Mr. Audenshaw he seemed quite pleased with his win, practically leaping out of his chair to bound over to JH for his trophy. Good on you, sir. Nothing wrong with feeling pleased with yourself at all.