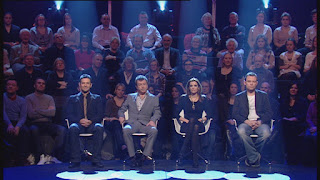 Another day, another four slebs taking on the chair. Tonight, first up was Strictly Come Dancing star Darren Bennett, probably best known for winning Strictly series 2 in tandem with Jill Halfpenny. Stuart Maconie is a well known DJ , broadcaster and writer. His best known book is probably “Pies and Prejudice : In search of the North”.
I will admit that psychologist Dr. Linda Papadopoulos has not registered on the Clark radar before tonight. A quick google reveals that she has made numerous ‘guest expert’ appearances on TV shows such as Big Brother and Celebrity Fit Club which doubtless explains why she hasn’t registered on the Clark radar. In like fashion I haven’t watched The Bill since Bob Cryer was in short trousers, so Andrew Lancel, who plays DI Neil Manson in said show was also unknown to me. However, I concede that neither of them really qualifies as a whothe’ell just because I didn’t know them.

Darren Bennett , representing The Caron Keating Foundation, took the Star Wars films as his specialist subject. Taking a strictly personal point of view, I’m very glad to say that many of the questions were about the first three movies, since I haven’t actually seen any of the others. I’m particularly pleased with having known that the third movie – which is actually episode 6, “Return of the Jedi” was directed by the late Richard Marquand. A double figure score is a respectable mark, and Darren achieved this scoring 10.

Stuart Maconie offered one of tonight’s more traditional MM subjects. On behalf of Sightsavers, he was to answer questions on 20th century British poets and poetry. I may be an English teacher, and I may have a degree in English Literature, but I was always much more of a medievalist, and to be honest was never that fussed on 20th century poetry, so I was quite proud of myself making it into double figures on this set of questions. I didn’t get as many as Stuart Maconie did, though, since he put on an impressive 14 and 1 pass, after kicking himself for saying George Davies rather than W.H. Davies. If he’d just said Davies I bet they would have given him the point.

Dr. Papadapoulos, looking stunning, I thought, was representing The Leukaemia Society. She gave us our second slice of popular culture questions of the evening, as her SS was Nirvana. She whizzed through her set, looking positively disbelieving that she could be asked such a simple question as where does the baby appear in the album “Never Mind”. Even I knew it was on the front cover. That was it for me, but not for Dr. Linda, as she managed a total of 16 and 1 pass.

Andrew Lancel’s chosen charity was Bat-I About Kids, and his chosen subject was “The Academy Awards”. He won no prizes for not knowing that Slumdog Millionaire won 8 Oscars in 2009, including Best Picture. Likewise he didn’t know that Liza Minelli was the first Oscar winner with 2 oscar winning parents. Oh well, 11 was a respectable score , on a round which seemed very fair to me.

Darren Bennett returned first, and was given the chance to explain what Strictly has done to popularise dancing, and I’m sure he had a fair point. Other points proved rather harder to come by in his GK round, and he scored 6 for a total of 16. Andrew Lancel , whose nasty copper on the Bill apparently watches Strictly and listens to Nirvana off duty, explained that the Bill is as realistic as it is possible to make a 30 minute show. He turned out to be a bit of a surprise package on GK, scoring a very useful 16 and no passes. Alright, these are not the sort of questions that would give a serious quizzer heart palpitations, but that’s the point. These people are not serious quizzers.

So then, in order to take the lead, Stuart Maconie needed to score in the mid teens. No pressure there, then. Apparently not, since Stuart absolutely breezed through his set, scoring the highest individual GK round ever recorded in the history of Sleb MM. His 19 points not only gave him a magnificent 33, it also beat Loyd Grossman’s performance in the first show – and I honestly did not think that was going to happen. So Dr. Papadapoulos had a mountain to climb. However first she had to put up with JH asking her to interpret his body language towards her. Look, John, you being a heterosexual male, it certainly didn’t take a degree in psychology to work out what you were thinking about the Dr. Still, lets concern ourselves with the round. The fact was that she already had more passes than Stuart did, and so needed 18 points. Dr. Linda is Canadian –Cypriot, hence her accent. So there are questions, with British cultural references which would be simple to anyone who has lived here for 20 years, but very difficult to anyone who hasn’t. So unless you’re exceptional, like reigning MM champion Nancy Dickmann, this is always going to work against you. It proved a little too much for Dr. Papadopoulos, although she managed double figures to take her final total to 26.

So well done, Stuart, and well done all of you for that. So will tonight bring us an even better score than 33 ? Surely not.