University Challenge - Round One - Match Nine

Two venerable Oxbridge colleges slugged it out in last Monday’s heat. Balliol, alma mater to such luminaries as ted Heath, Richard Dawkins and Captain Hook were represented by George Corfield, Michael Bennett, Robin Edds, and captain Amy Vickers. Nice to see that Amy Vickers is from Chiswick, since that’s where I was born. Peterhouse, on the other hand, could boast David Mitchell, Christopher Cockerell and Sam Mendes. Their team were Mark Smith, Edmund Zimmer, Melanie Etherton and Alex Davis. Let’s crack on.

Mark Smith buzzed in on a description of a work of medieval literature. I’d already offered The Divine Comedy when he chanced his arm with the Canterbury Tales. Far too secular, I’m afraid, and it fell to Amy Vickers to supply the same answer as mine to take first blood. The first set of bonuses, on the diaries of Chris Mullins, was tricky but gettable, and they managed one. George Corfield knew that the 8 letter mathematical word which can also describe a type of argument is circular. This brought up Balliol’s second set of bonuses in the shape of British raptors. They missed the hen harrier and the hobby, but took the buzzard for five points. A fine buzz from Robin Edds saw him reveal the sword, mirror and jewel as part of the sacred royal regalia of Japan. Good shout that. A set of bonuses on David Hume saw them take a further 10 points. For the picture starter we saw an html tag, and Amy Vickers was first in to identify it as the paragraph tag. This earned three more of the same, and for the second set running Balliol took two of the three. The words ‘buying’ , ‘books’, ‘submission’, and ‘flog’ held out an irresistible invitation to leap in with the title “Fifty Shades of Grey” for the next starter, and Edmund Zimmer was the first to succumb. He was right to do so, earning Peterhouse their first points of the competition, and a set of bonuses on historical musical instruments. One was taken, but at least they were off and running now. On the cusp of the 10 minute mark Balliol led by 70 to 10. Balliol had by far the better of this opening period, but they hadn’t capitalized on it by taking a huge number of bonuses. Plenty of time for Peterhouse to come back.

George Corfield knew that the term ‘pecking order’ really does come from the hierarchy hens establish among themselves. A set of bonuses on herbalists certainly wasn’t easy, and they managed to take one. Then for the next starter we had one of those moments that, while they may seem relatively trivial as the competition progresses, can turn out to have been pivotal moments in the contest. The teams were given a list of people, and asked which sporting event linked them. George Corfield supplied the correct sport, rowing, but not the actual event, the University Boat race. This put Alex Davis in, and gifted Peterhouse a set of bonuses on Turkish words. I’d suggest that there isn’t a big football fan on the team, as they missed out on saray, as in the end of Galatasaray. They took the next two, though. Not daunted Amy Vickers took the next starter for Balliol, recognizing a question linking RP and RIP. A set of bonuses on diffraction followed. They did nowt for me, and they did nowt for Balliol either. The music starter gave us a little snatch of don Maclean – ah, I remember him with Peter Glaze on Crackerjack ( no? Ask your mum or dad) – which was enough for Alex Davis to buzz in with the title Vincent. The bonuses were bands named after artists. I was pleased with myself for dredging up the Dandy Warhols. I knew the Rembrandts and guessed Bauhaus. Peterhouse knew the Rembrandts. A very good early buzz from Amy Vickers identified a quote from Beatrice in “Much Ado About Nothing”. Having just had a bonus set on Physics, they drew another short straw w3ith a set of German films. To be fair, they managed two, which was two more than I did. Respect to Alex Davis for knowing that Hamilton was the surname of the protomartyr of the Scottish Reformation – and for knowing it so quickly as well. A good UC set followed, with questions such as – the last four letters of the name of which European country are the name of the location of the earthly location first mentioned in chapter two of the book of Genesis. The answer is Sweden – Sw – Eden. Got it? I’m sure. Peterhouse did, although they couldn’t quite manage the next two. A lovely starter followed. Six of the states of the USA have names that do not contain the letters US or A. We were given two – New Mexico and New York, and asked for 2 others. Amy Vickers offered Ohio and Vermont, and was correct to do so. Oregon and Wyoming are the other two. Two bonuses were taken on the Pygmalion effect, and its opposite, the Golem effect. Something about isosceles Triangles followed. It was basically an arithmetic question, but by jingo Edmund Zimmer had it quickly. Bonuses on Bismarck took their score to 80 at the twenty minute mark. Still 50 points behind, but at least it had been a better period than the first, and they were within two full sets of closing the gap completely. Balliol led with 130.

The second picture starter showed us a photograph of famous Darth Vader soundalike James Earl Jones, who despite an answer I was given in a quiz once did NOT shoot Martin Luther King. Edmund Zimmer supplied the correct answer . A nice bonus set followed. James Earl Jones has an EGOT ( altogether now – a bit of ointment will clear that up for you, mate) – that is the set of Emmy – Grammy – Oscar and Tony – and for the bonuses we were given three more EGOT holders. Mel Brooks escaped them, but Sir John Geilgud and Whoopi Goldberg brought home the metaphorical bacon. Fully warmed up now Edmund Zimmer buzzed in early with filibuster as the political term adopted from piracy etc. etc. I got a maths bonus right at this point, knowing a Fibonacci sequence when I heard it defined. That was it for me, but Peterhouse managed a full set, which put them a mere 5 points behind. Edmund Zimmer knew that Wrens were both a baroque architect, and the author of Beau Geste. For the first time in the contest Peterhouse had taken the lead. Would they relinquish it again? Well, they didn’t quite take a full set on John Osborne – that’s the playwright, not the former West Brom goalkeeper. Still it was another 10 points, and they had all the momentum. They capitalised as well when Alex Davis recognized that the biological term being asked for in the next definition was adaptation. French cities saw the team momentarily stumped, but they were in the lead, and that was what mattered. Edmund Zimmer won the buzzer race to identify Erasmus as an anagram of masseur. Well, it wasn’t quite as simple as that, but you get the gist. One bonus of the following set on vertebrae was converted. No matter, for Alex Davis took the next, knowing about x rays coming from a crystal lattice. A timely full set on economists put Peterhouse right on the brink of the finishing line, although George Corfield proved that there was still life in Balliol by answering that frogs do battle with mice in some old work from long ago. Bonuses on towns with 4 letter names only yielded 5 points. Alex Davis knew that if you’re asked for a Spanish painter born in the 1880s Picasso will always give you a pretty good chance of the points. The bonuses were all shorter words that can be made from the letters in the word affluent. Not all easy, and they took one. It didn’t matter, for it was just a question of the final score left now. Edmund Zimmer knew that the DPRK is North Korea. Early aviation yielded another 10 points for Peterhouse. Edmund Zimmer was having a field day in this last part of the contest, and buzzed in to link Britain’s assassinated prime minister and Prince Charles’ first wife via the name Spencer. Those old favourites, definitions from Johnson’s dictionary, followed , giving another five points to Peterhouse. That was it. Following a turbo charged last ten minutes, Peterhouse won, and they won by more than 100 points, with 250 to Balliol’s 145. Hard lines Balliol. I have a feeling that they might regret those missed bonuses earlier, as they might just miss out on a repechage slot. I don’t know, they just seemed to become discouraged, and lose that vital half second of speed on the buzzer once Peterhouse started making a fight of it. Congratulations to Peterhouse – good luck in the next round.

When Balliol offered chicken hawk as the answer to the name of a British raptor JP was nearly in apoplexy. “Chicken Hawk?!!!It doesn’t exist in this country. Or anywhere as far as I’m aware!” Right then Jez. Prepare yourself to be educated. In a number of the Warner Brothers Merrie Melodies/Looney Tunes cartoons, Foghorn Leghorn has to deal with a tiny pipsqueak of a bird who keeps attacking him because he is, and I quote, a ‘chicken hawk’. So even if it doesn’t exist anywhere else, it exists in that world, and that’s good enough for me, I say, boy, I say that’s good enough for me. 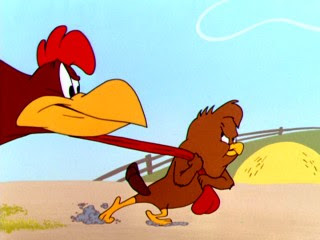 George Corfield earned a wonderful old-fashioned look from the great man when he chanced his arm by offering just James for the name of James Earl Jones.

A piece of crucial evidence for the wave theory of light is the Poisson Spot. ( wait for it, wait for it) Sounds a bit fishy to me . . . I’m here all week, ladies and gents.
Posted by Londinius at 10:31

My Dad spotted Paxo's slip up on the Chicken Hawk too. He said straight away that there was such a thing.

Seriously, though, that was astonishing that Peterhouse managed to pull that game around. Throughout the second half, I was just waiting for Balliol to regain their opening momentum and pull away. Quite the opposite happened there!

And, of course, poor Balliol fell just five short of a possible repechage place, and ten short of knocking Christ Church off. Real shame, as they were decent enough a team.

But Peterhouse deserved that win, purely for managing to recover such a shaky start around to win by over 100 points. Remarkable stuff! Similar to UCL coming from well behind to beat Bangor comfortably in the QFs last year, but on a much larger scale.

On the bonuses, Peterhouse got 23/42, while the Oxonions got 12/27, which, as you say, contributed largely to their undoing. Both sides incurred one penalty.

Tomorrow, York play Bath. And then the week after, another Oxbridge match between Pembroke for Cambridge and Somerville for Oxford.

I just want to say that I adore your "UniChal" blogs! As a long-time mega fan of the show, it's wonderful to read your very detailed write-ups of every episode. You notice all the hilarious little things that my family also notice. Brilliant! I only found this blog yesterday but I'll be sure to come back every week.

Hi Jack
Interesting with the stats - neither team totally convincing on the bonuses.

Thanks very much for taking the time and trouble to leave your kind words, and welcome to LAM. Now you're in the fold I hope that you'll keep coming back.