My middle daughter Zara has just finished her degree in ceramics, and is now awaiting her results. She wasn’t working this weekend either, so she came home on Saturday. This meant that she was able to accompany us on our Sunday morning car booting ritual. Mary and I, and whichever of the girls a) are around - b) are up early enough and - c) want to usually go to at least one car boot sale, and more often than not more than one on a Sunday Morning. Off and on we’ve been doing it since I passed my driving test in 1991. Of course, back then we only had the two kids, and they, poor dabs, didn’t have any choice in those days. Still, now that they have the choice it’s nice that they often choose to come anyway. This Sunday we had Phillippa (along with incipient first grandchild – 8 weeks to go), Zara and Jess with us.

I am getting towards the point. We usually split up when we get into the sale, and I’m invariably back to the car before anyone else. Valuable reading time, I call it. Don’t know why, but I find sitting in the front seat of my stationary car in a car park to be a perfect place for reading. Zara was next back, and she was holding a box. It was a 1986 Brit Quiz game. She thought that it was the kind of thing I’d like, and I have to say that she wasn’t far wrong. So that makes the fairly tenuous quiz link with this post.

I don’t know if you’ve ever played the game, but it’s a decent enough quiz card game, with a board which is only slightly smaller than the playing surface for Ubi, which is the biggest that I know. Both the box and the board strike me as looking awfully like the work of the late great Welsh cartoonist Grenfell Jones – or Gren to his many fans. If you don’t know his work, well don’t feel too bad, since Gren was probably best known within his beloved Wales, where his weekly “Ponty an’ Pop” strip in the South Wales Echo had a large and very devoted following. As I say, I’m sure that the artwork and design are Gren’s, but I couldn’t find a signature, and I haven’t been able to confirm this on the net either.

Gren also produced a daily topical cartoon for the Western Mail, and I must admit that I’ve become quite interested in political cartoons and cartoonists, since in the course of researching my family history I found that I have a great great great great great ( that’s 5 times ) grandfather who was one.

Philip Dawe is not a name that is well known today, but he worked under the great William Hogarth for some time, and produced some cartoons that were well known in his day, in particular one called “The Bostonians in Distress”, much liked in the USA for its seeming support of the colonials’ grievances during the build up to the American Revolution. 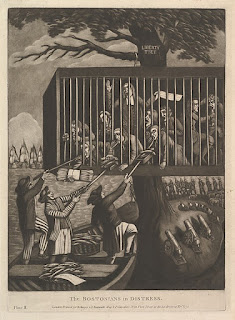 The Bostonians In Distress - by Philip Dawe

Philip’s son George Dawe was probably the best known artist of the family. He was a hugely successful portrait painter whose portraits of Princess Charlotte, daughter of King George IV, and Duke Ernest Augustus, later King of Hanover, are on display in the National Portrait Gallery. George’s work so impressed Tsar Alexander Ist that he was invited to go Russia to paint portraits of the victorious Russian Generals from the Napoleonic Wars. Hundreds of them. There is a wing in the Hermitage in St. Petersburg that has over 300 of these portraits on display. George’s younger brother Henry Edward Dawe was my great great great great grandfather. he was an engraver, and an artist in his own right, although never as successful as George, and at one time he went out to Russia to assist George, who had been appointed Official Court Portrait Painter. So if any of my team mates past or present happen to be reading this, and you’ve ever wondered why I like to doodle while I’m playing, well, now you know the reason. It’s in the genes. 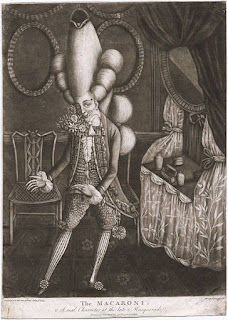 Another one of Philip's - this is called "The Macaroni"
Posted by Londinius at 12:12