Right, well, you remember me mentioning that I was playing catch up with my homework for a lot of this week. Or maybe you don’t. Anyway, the fact is that it has been a very busy – and enjoyable week.
On Monday night we had the Muriel Williams’ trophy quiz in Bridgend. This is the traditional curtain raiser to the Bridgend Quiz League season, which is commencing at the beginning of October. A good quiz – we won last year , and thought quite a bit of our chances on Monday, since we had a full team out. In the end we were beaten by the Royal Oak Nomads, who were runners up in the league last year. I would say that this is proof that the league is going to be every bit as tough to win this coming year as it was last season. But I think we knew that anyway. Well done to Steve and the guys from the Nomads – very well played.

On Tuesday night we had one of the highlights of my quizzing year. Last year I was invited to take part in the fund raising quiz for the Get Connected Charity . I would always try to help out a good cause anyway, but the fact is that being a teacher, who works with young people every day of my working life, it’s a charity particularly close to my heart. Get Connected is the national helpline for young people under-25 and has been providing free, confidential help for over 10 years. Last year Jesse Honey , Phil Tufnell and I , among others, were auctioned off at the start of each round , where a team could pay for our help to answer the questions just in that one round. It was a fantastic evening, topped off when Stacey Solomon performed for us all after the quiz.

Well, I didn’t see that the evening would be topped this year. I was wrong. Held once again in Floridita in Wardour Street, the lovely Alex who organized the event pulled out all the stops, and assembled a collection of Brainiacs ( their word, not ours ) consisting of the last 4 Mastermind Winners , 2 Chasers , 1 Egghead , and the skipper of the mighty Crossworders, of Only Connect fame. Or to put it another way, Ian Bayley , Jesse Honey, Nancy Dickmann, me, Mark Labbett, Anne Hegerty , Barry Simmons and David Stainer. 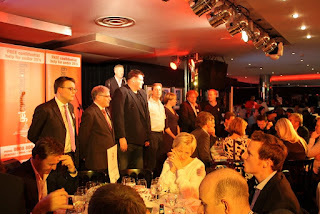 Thankfully there was no swimwear section after the initial acution here

Thankfully there was only one round where I wasn’t bid on, which salvaged my ego a little bit. I don’t know the exact figure, but I believe that the money raised by bids for the brainiacs alone was in excess of £10,000. 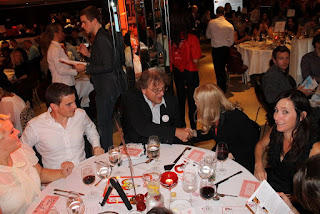 As I said, a great evening. It was lovely catching up with Nancy and Anne again, and Mark is always entertaining company. I didn’t really get a chance to chat much with Ian, David or Jesse. I’ve met Barry before on a couple of occasions, most notably during Are You An egghead, but we had a good old chat this time, during which he was kind enough to endorse the in the news questions on this very blog. We compared notes on quiz books. We both love them, but Barry has a library of them which dwarfs mine. A point I lost no time in informing Mary the minute I got home. Her reply was, if I remember her exact words correctly – “ Shut up you stupid git, and get in bed, its half past three. “
Barry, it was a pleasure talking with you, and I hope that I see you again soon.

A last point about the evening. Our host was Rory Bremner, who was on very good form . You know me by now, I speak as I find. I went up to him and asked if I could have a photograph with him, which he kindly agreed to. Sadly the camera didn’t work, - the pictures on this post all come from the Get Connected site. Still, he made a point of having a chat with me about quizzing, and said that he has been approached for Celebrity mastermind. Rory, go for it ! I found him to be a very nice guy indeed, and so , wary as I am of damning his chances with the curse of the Clark sofa, I respectfully ask any readers who are also devotees of Strictly Come Dancing to please, Vote Bremner !
Posted by Londinius at 05:30