I had a strange dream last night, which I’d like to share with you, if I may. I was in a very exclusive restaurant in Soho, quizzing, of course. There were many teams, and they were bidding for my services each time a new round started, and the bidding started at £100 a round, and just kept going up ! 2010 Mastermind Champion Jesse Honey was there, and so was Phil ‘Tuffers’ ‘The Cat’ Tufnell. The Stig from Top Gear turned up in time for the last round as well, as I remember it, although I think he kept his helmet on. Then, when I was about to leave, I found I was standing next to Stacey Solomon, who let me put my arm around her and have our photograph taken, and then she started to sing. And do you know what the strangest thing of all was ? It wasn’t a dream at all. It all really happened yesterday.

I’d better explain. I received an email from the Get Connected charity back in August. You may already be well aware of Get Connected, but in case you’re not, I should explain that Get Connected is the free, confidential UK helpline for young people who know they need help, but don’t know where to find it. The helpline is available via phone, email and webchat. They were in the process of organising a big, charity fundraising quiz evening. One of the features of the evening was that the teams would be able to ‘buy a brainiac’ to help them during one of the rounds of the quiz. They wanted to know if I would be prepared to be one of the brainiacs for sale during the evening ? Would I ? !

I think I’d better confess that I did check out the Get Connected Website first before I replied, but when I learned a little bit more about what the charity does, then I couldn’t reply quickly enough. I’m a teacher working with children between the ages of 11 to 16, so I know just how vital the work that an organisation like Get Connected does actually is. So I signed upon the dotted line.I’ll be honest, I did wonder why they’d picked me to ask. I know that its surely because I won Mastermind once upon a time, but I never really plucked up courage in the evening to ask how they got my email address. All I can guess is that they must have found LAM, and found my email that way. I’m delighted that they did.

I knew that Jesse was going to be one of the Brainiacs, since his name was already being used on the promotional literature for the event. However I didn’t know who else was going to be there. I arrived about an hour early, due to the fact that the M4 was in a particularly benign mood while I was driving in yesterday evening. The quiz was in the Floridita Restaurant in Wardour Street in London. 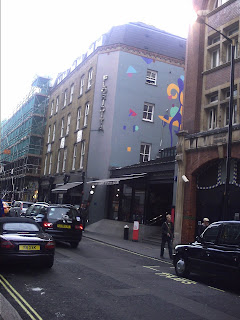 When I asked who the other Brainiacs were going to be , I was told that they were Jesse; Ben Haley, the champion of the Get Connected Quiz, and also a trustee of the charity; Tom Hall, Travel Editor of Lonely Planet, Tuffers and the Mystery Brainiac, who turned out to be the Stig. Tuffers and the Stig turned up a little later in the evening, so at the start it was just Jesse, Ben, Tom and myself. Jesse I met at Champ of Champs, but I didn’t previously know Ben and Tom, but they were great company, and I felt at ease with them right from the start.

There were 7 rounds – General Knowledge, History and Geography, Art and Literature, Pictures and Photos, Entertainment, Science and Nature , and finally Sport. If you read my post on Moral Victories last week, you can imagine how relieved I was to see that no one could bid on our services for the Photos round.

Each table had the option to buy a joker for £80, which could only be played once. However they could also buy a killer card for £40 , which they could use to halve another team’s score for that round. They could buy one of these for each round if they wanted. Then there was the buy a Brainiac option. At the start of each round we were auctioned off , with bids starting at £100 a time. Jesse went first, and he fetched a staggering £700 for the first round. I was pleased that I didn’t have that much riding on me , it was more like £200 for the GK round, in which, I must admit , I did not exactly cover myself in glory.

Thankfully I did better in all of the other rounds, and the rest of the rounds secured bids for me of as low as £200, and as high as £700. I’ve got to be honest, I did tell the team who paid the top price that I would have sold my body for considerably less, and my soul for not very much more. The worst thing was that they had bought me for the Science and Nature round, and to say that this is not my best subject is a huge understatement. Thankfully the round was largely old chestnuts along the lines of – at which temperature do the Celsius and Fahrenheit scales read the same ?

The actual quiz part of the evening took about 3 hours, but it seemed like much, much less. And I have to be honest, if you’ve never played in a quiz where you play for a different team for each round, then its an experience you really should try at least once. I don’t know the exact total which was raised by the end of the evening, but the generosity of the teams taking part was staggering. I was told that in total more than £2000 was raised from bids for my services alone. I can only imagine how much Jesse, Ben and Tom must have raised.

With a long drive ahead of me I really had to rush off pretty much straight after the quiz, and unfortunately didn’t have a chance to stop and listen to Stacey’s performance. In case you’re not a fan of the show, Stacey was third in last year’s X – Factor, and has her own blossoming singing career now. The lovely Stacey Solomon and me. I’m the one on the right.

I’m really , really sorry if this post sounds self indulgent and smug. Yet I wanted to share with you what has been one of the most enjoyable and remarkable quiz evenings I have ever taken part in.

As a postscript, the team who wasted their money on me in the General Knowledge round showed remarkable generosity by buying me again for the Entertainment round, where I was able to serve them a little better. They asked me what I was doing next Thursday. I told them that the truth of the matter is that I’m question master in the Aberavon Rugby club next Thursday, and I asked them if they fancied having a go. Well, lads, if by any chance you happen to be reading, the offer still stands.
Posted by Londinius at 10:18