I’m not going to lie to you, I was there so I already know who won each of the 4 heats of the series. I hadn’t seen any of the other heats in person, though, and didn’t know what had happened in each, and how it all worked out. 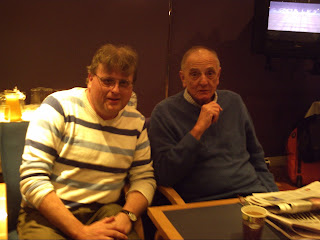 So the first heat pitted two Magnus champions against two John Humphrys champions. First up was none other than my predecessor Geoff Thomas, champion in 2006.

Since winning Mastermind Geoff added the 2008 Brain of Britain title to his exceptional resume. In anybody’s list of pre tournament favourites, Geoff’s would feature prominently. In his final, Geoff triumphed answering questions on Margaret Mitchell and Gone With the Wind. Tonight Geoff took the life and career of the man many people consider to be the finest cricketer of all time, Sir Donald Bradman. Geoff missed the first question, and dropped one more later on, but apart from these minor blemishes he produced a fantastic round of 16 and no passes. Game on. 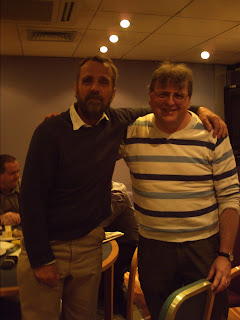 Dr. Jeremy Bradbrooke was champion in 1987.

This was a series which saw, amongst other things, the first Mastermind appearance of Kevin Ashman, who reached the semis. In “I’ve Started So I’ll Finish” the late great Magnus commented on Jeremy wearing his lucky underpants for the final, so I was delighted to hear Jeremy mentioned that these still exist!

Dr. Bradbrooke opted to return to the subject with which he won his final, the Crimean War. I think it was left very much to the individual champions as to whether they reverted to old subjects, or opted for new, although I did get the impression they were happier for recent champions to go for new subjects, which is quite understandable.

Considering that its 23 years since Jeremy last sat in the chair, he found his form pretty quickly. He too scored a very fine 16, although he did succumb to one pass. 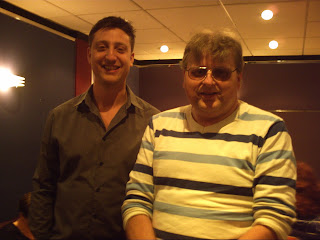 Current champion, LAM reader Jesse Honey said in his filmed insert that one of the thoughts which went through his head on winning the latest final was relief that he would never have to sit in the chair again ! I’m sure this was just Jesse being modest, since he has never handled a stint in the black chair with anything less than aplomb.

His final subject was Liverpool Anglican Cathedral, but tonight it was a case of now for something completely different, as he opted for National Flags of the World.What followed was a round the like of which we have not seen since. . . well, ever. The top score for an individual round before was Joe West’s 22. Tonight Jesse went one better with a perfect 23. A superlative performance, albeit one that seemed to finish the game as a contest before half time. 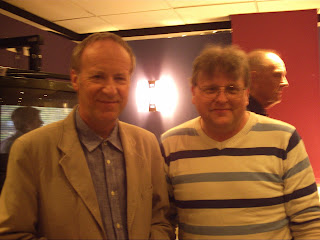 Stephen Allan milked this as he made his way to the chair, and very funny it was too. Stephen won the 1991 final answering on Sir Francis Drake. Tonight he chose the Life and Poetry of Edward Thomas, a subject which obviously won John Humphrys’ approval. You would have forgiven Stephen for letting Jesse’s breathtaking round put him right off, in the same way that Bob Beamon’s 1968 long jump demoralised all of his opponents. He didn’t. A great round saw him also score 16, with three passes.

Take Jesse out of the contest and it was beautifully balanced. Geoff was first to return for the GK round. You might recall that Geoff set a Humphrys era record in his final with 36, a record which was finally surpassed this year by Jesse himself. Geoff didn’t quite manage to hit the same form tonight, but still scored a distinctly useful 12 and no passes, to take his score to 28. Jeremy returned to the chair knowing that equalling Geoff’s score would not be enough, by dint of the pass he had picked up in the first round. He gave it a go, but levelled out at 9 and 1 pass. I did get a chance to have a chat with Jeremy behind the scenes, and he is an absolutely lovely chap, and I really hope that he enjoyed the day as much as I did.

It remained then for Stephen Allan to strike a blow for the Magnus era champions, and he certainly didn’t let them down. A battling good 13 and no passes saw him overhaul Geoff’s score – and achievement in its own right – and guarantee him at least the runner-up spot. To be honest, it was highly unlikely that Jesse would fail to get the points needed to win. What was at stake , though, was a new Humphrys era record. Jesse scored 37 in his own Grand Final. 15, and that would be broken. 2 minutes later Jesse had done it, clinching his place in the final.

Very well played gentlemen all. A great start to the series.

Do you know how many of the previous champions are still alive?

The only champions I know to have passed away are Nancy Wilkinson and Sir David Hunt.

Not to take anything away from Jesse Honey's remarkable first round - but the "bleep" for 2 minutes started *before* John Humphrys began reading his last question!

Sorry, you'll get no clues from me ! Still, you onlyhave to wait until Friday's final to find out.

Well, it made no difference to the outcome of the heat, and it was a very fine line. Its a record round, and I don't expect we'll see that beaten in a 2 minute round for a very long time indeed, if ever.