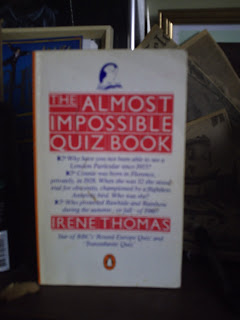 Last week I got into a conversation about quiz books with a quizzing friend of mine. He’s a much younger guy than I am, although a brilliant quizzer in his own right, but he loves quiz books, and old quiz books as much as I do, and we were swapping notes about our favourites, best buys from boot sales , charity shops and the likes, and so on.

Fast forward to Thursday. I’ve mentioned my friend John before. A great quizzer, and great company, and we’ve been haunting some of the best pub quizzes between Swansea and Bridgend together for many years now. John is in the throes of redecorating, and he has made a serious, dare I say it, almost life changing decision. He is cutting down on his collection of quiz books.
“Surely it hasn’t come to this, John ? “ I asked, trying, Samaritan-like, to talk him out of this tragic resolution. Yet nothing would move him. If he hadn’t looked at a quiz book for five years, he decided, then it had to go. Which is where I really come into the story. John offered me the pick of any of them I wanted. Now, my conscience was fairly clear, since I had at least tried to talk him out of it.

After dropping my middle daughter Zara off at work in Cardiff I made my way round to John’s, and I will admit that I was rather excited about it. John has been collecting quiz books for much longer than I have, well over 30 years. Still, what I saw when he led me into the room where he had placed all the books that had to go it exceeded all my expectations. There were literally hundreds. I mean, I currently have between 2 and 3 hundred quiz books, but the ones he was chucking out dwarfed my whole collection. Even after I discounted those he was offering which I already own, the array was still highly impressive, and it took me the best part of a couple of hours to go through them. Part of the problem was that we kept stopping, and discussing the relative merits of various books and formats. Together we came up with a couple of rules of thumb regarding quizbooks – namely : -
Anything that calls itself The Best – The Biggest – The Ultimate – isn’t.
Anything that has a pint of beer on the front cover will have contents that are as unoriginal and lacking in imagination as the cover.
More expensive does not always mean better.
Cheaper often means worse.
Still, enjoyable as the discussion was, it wasn’t helping us sort through the books, and so we cracked on, and I took about 40 all told.

There were a couple of books that John was extremely keen for me to take with me. One of them is what I really wanted to tell you about today. I had never come across
“The Almost Impossible Quiz Book” by Irene Thomas before. If you’re too young to remember Irene Thomas , she was the first lady winner of Brain Of Britain, and a regular for many years on the Round Britain Quiz. You could say that she was a famous quizzer before there were any famous quizzers. So her quiz credentials are impeccable. Published by penguin in 1982, this book follows pretty much the same tack as Round Britain Quiz. If you’re not an aficionado of the series, basically regional teams of the great and the good are asked to unravel seemingly cryptic questions. Here’s a selection from the first few pages of the book : -

1) Who went off to France in a fury on 12th December 1936 ?
2) When was Gruoch’s husband apparently menaced by trees ?
3) How was a combination of a colour, a loaf, and an almanac connected with a niece of George IV ?
4) Where might you find an English soup of very little worth ?
5) How are Peter, Owen, Billy and Albert related to a chimney sweep ?
6) How did Aristides Psairotis’ grove of olive trees become eternally English in 1915 ?
7) A pelican was admitted in 1812, a badger in 1848, and a beaver in 1859. To what ?
8) Which men of straw gave their name to an Italian opera ?
9) Whose arms have three legs ?
10) The one in Messina is a storm in a teacup, while the one in Vienna promises like for like. What are they ?

Great questions, of the – Ah , I get it - variety when you know the answer. Like many of my favourite quiz books, something I could only use VERY sparingly for a pub quiz, but blimey, doesn’t it just beat asking people the more common name of Gravelly Hill Interchange into a cocked hat ! I’ll give you a few days to work on the answers – and if I can’t get to a PC while I’m in Spain, then I promise I’ll post the answers when I come back. Adios amigos.
Posted by Londinius at 04:47

#7 is a really nice question. I et I'd think that of the others if I could work them out.

I will explain just a couple of them. If we take the first one, possibly the most important event in British history in the year 1936 was the abdication of King Edward VIII. Immediately after the abdication he left for France aboard the ship HMS Fury.

Then number 9 which is based on a pun. Arms in the sense of coat of arms, or emblem The Isle of Man has three legs upon its emblem.

Just one more. In Italy zuppa ingles ( apologies if spelling incorrect ) which translates literally as english soup is actually the name given to the dessert trifle. A trifle, of curse, is a thing of little worth.

Wonderful questions which make you think.

I think I've managed 7 of the 10 questions listed. A few of them are now quite easy with Google - not the case in 1982! The Internet has certainly changed what can be set in quizzes over the last 20 years...

I could answer half of them without having to look anything up. One was 9 (though it's not a unique answer). Having "read" English, as they say, the allusions in 2, 6 and 10 are enough to give them away without knowing the historical parts. And 5 is just a straight find-the-link question, so probably the easiest of the lot.

I suspect 3 is much easier than it looks...

Number 3 isn't easy, but its a History connection. Work on the neice of King George IV - you know who she was, and then on from there. As regards the almanac - here's a clue. You're looking for the 19th century almanac which contained names and etails of all the eligible protestant prinesses of Europe.