Well, there we are. That was the end of that then. In the interests of fairness, its only right that I should give you a rather more detailed account of my last match in AYAE2.

I hope that I don’t shatter too many people’s illusions if I tell you that the three shows were actually shot over a relatively short period of time. In fact my matches with Olav and Anne were actually shot on the same day. I don’t offer this by way of an excuse – there’s no point in me even trying to do that because if you watched the match you’ll know that Anne beat me by the simple expedient of being better than I was. I believe that they went on to film both the semi finals and the final the very next day. So its all rather hectic.

My match against Olav was first up in the morning, while my quarter final with Anne was scheduled for the late afternoon. So this gave me quite a bit of time to kill, in which, in the nicest possible way, the production team really didn’t want me cluttering up the place. So I went for some lunch in the new Westfield Centre, which is literally over the road from TV Centre. I was, in all honesty, in a little bit of a state of shock. After all, if you enter a show like AYAE you know that sooner of later you are going to come up against a star. If I’m honest I had hoped that it wouldn’t be a second round show, but there we are. I was prepared to take my beating like a man, and bow out of the show as gracefully as I could. Then I beat Olav. 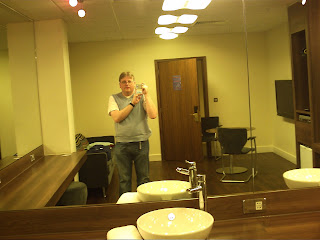 I wasn’t really sure how to handle it, and was in a bit of a daze as I wandered through the Westfield. In the end I got a bite to eat, and bought the second volume of Bobby Charlton’s autobiography. Then back to the dressing room to read for a couple of hours. Incidentally, I’ve included a picture of the dressing room here. Nice, isn’t it ? I have to say that these are the nicest dressing rooms I’ve ever been in. I had been in them before for both “Come and Have A Go “ and “ Eggheads”, but then I was part of a team on both occasions. The changing rooms for WWTBAM are not as big or as nice – but then the Mastermind dressing rooms are non-existent, so I should worry.

Anne is a valued LAM reader now, but to the best of my knowledge we had never met before we shared adjacent chairs in the makeup room. So there was a lot of catching up on who we’d played in which rounds. I have to take my hat off to Anne – if she was at all phased by the fact that I’d fluked my way past Olav in the previous round she didn’t show it. In fact she came out of the blocks at a blistering pace, and it seemed to me that I’d hardly so much as blinked before she was 2 Eggheads to 0 up. Not just any Eggheads either, but Kevin and Daphne. The fightback saw me take the next two rounds on sudden death, to claim Barry and then Chris, which at least gave me some kind of chance. If you watched the show you’ll know I was whitewashed on Science. I’ll go further than that. I was lucky to get zero. So Judith joined Anne for the final round.

What a rollercoaster the final round was. I was given a just about guessable one for the first question. Anne was given a bouncer, and used Kevin. All square, and all square in Eggheads, with Kevin now out of the game. A nice second question, and Anne used Judith for hers. Now , if you were watching, you might have thought that I had the whip hand. I would be lying if I told you that it didn’t cross my mind at the time. However with my next question one of my many weaknesses was exposed. I don’t know who the various ministers for this that and the other are. A serious quizzer probably should know this, but I’m just too damn lazy. I got it right, but I asked the wrong Egghead. Chris didn’t know, so I needed to ask Barry as well. So the seesaw swung back, since Anne still had Daphne. The next question , when Desmond Tutu won the nobel peace prize I have no excuses for . I ought to have got it right. I didn’t. That’s why Anne won. Not because I got a question wrong, but because she didn’t make a mistake. She kept her nerve, backed her excellent knowledge, and reaped her just reward. It was a very fine performance.

One other compliment I have to pay to Anne. She is a great and gracious winner. I thought she said some lovely things about me at the end of the show, and I’m really grateful for that.

Twelve Yard seemed a bit dithery about arranging a taxi back to the hotel for Anne, and since I was passing it on my way back to Wales I offered her a lift. Away from the studio we could both relax a bit, and it was a great pleasure to start to get to know her. I hope that we’ll meet again at a quiz some time in the not too distant future.

Well played Anne. I wish you the very best of luck in the semis – even though I know it was all recorded months ago, I’m sure you know what I mean.
Posted by Londinius at 09:44

Hi David, great match, very close, that arts and literature round may have been the longest round I've ever seen on either AYAE or the regular show! Two great players and an extremely exciting competition, congratulations on making the quarter finals and I'll be cheering Anne on in the Semi finals!

It was a lot of fun, and it was no hardship to lose to an opponent who was that good. Thanks for your kind words, they are much appreciated !

Brilliant game David - you did yourself proud...could have gone either way !

Why , thank you Jan ! That's really kind of you. I must admit, even though I knew what was coming I still enjoyed watching it yesterday, and I did think it was a good match.