Are You An Egghead 2 Take Two 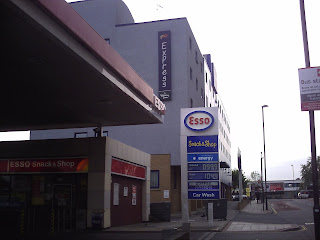 I thought that it might be quite interesting if I told you all about my second round appearance on AYAE, so I wrote quite a detailed account of it at the time. Allow me to share it with you.

My 2nd round match was scheduled for a Monday, and the call time to arrive at TVC – Television Centre for the uninitiated – was 07:00. You’ll appreciate that this made an overnight stay in a hotel necessary the night before. So the afternoon before, on what turned out to be the hottest day of the year so far I drove almost the entire length of the M4, to the Holiday Inn Express in Park Royal, where 12 Yard had booked me in for the night.


This wasn’t without its own problem. I’d stayed in the hotel the night before my first round match, and had a bit of a problem at reception. The guy behind the counter said, yes, my room had been paid for, but he still expected me to pay a £30 deposit upfront. I played along so far, offering him my debit card, but he wasn’t having it. Actually, I could have paid him cash, but I was damned if I was going to. So I refused, and stood my ground. He backed down, with rather poor grace if truth were told. A small victory. 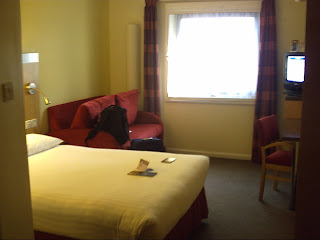 Accomodation, as you can see, was basic but functional. The two best hotels I’ve ever been put up in for a quiz show were the Palace Hotel in Manchester for my Mastermind semi final, and a wonderful hotel in Kensington just around the corner from the Royal Albert Hall, for Come and Have A Go If You Think You’re Smart Enough. That was a two night stay as well, which made it even better. However, I digress . 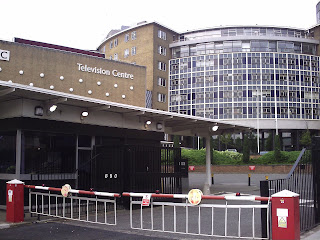 I drove into TVC by 7 am the next morning. Once I was picked up in the foyer of TVC Rebecca, the production assistant took me to my dressing room. If you’ve never taken part in a TV show before, then I can tell you that the bit between your arrival and actually going on set is usually very tedious, and is mostly concerned with checking what you are going to wear – avoid lines, checks , white or pale colours – and then getting you down to makeup. However I hadn’t been in there long before Rebecca brought in my opponent to meet me – Olav Bjortomt.

Now, in the interests of truth I will admit a couple of things here. Firstly that a friend of mine who was in the know had actually told me beforehand that Olav would be my opponent – I’m sorry Twelve Yard, but you have a security leak somewhere in your organisation. Secondly, as soon as I heard that Olav was going to be my opponent I pretty much felt – Oh well, that’s as far as I go, then. – I wasn’t being pessimistic. The simple fact of the matter is that Olav is a much better quizzer than I am. There’s no shame in that. He’s a much better quizzer than most people. Yes, if I’m honest I did have it in the back of my mind what had happened in last year’s series, when Shaun Wallace had upset the odds to beat him, and in the People’s Quiz where he had been by far the most impressive qualifier, yet didn't win the series, but lightning doesn’t keep on striking in the same place.

So in a perverse way the pressure was off me in the match. I had no pretensions about being good enough to win the series. I really hadn’t wanted to be knocked out in the first round, and thankfully I hadn’t been. If I had to lose, then better that I lose to a star, rather than someone without such a quizzing pedigree and background.

Thank heavens for the iplayer, for I could remember very little about the match itself before I watched it back. Research told me that Olav had won 3 Eggheads to 2 in his first round match of 2008, and then 4 Eggheads to Shaun’s 1 in the second round match. It wouldn’t have done my confidence any more good if I’d known that in his first round match against Gill Woon this year he’d won 4 Eggheads to one. I’m a believer in the theory that the more times that you take part in a particular TV quiz, the better you get at coping with its demands and using a strategy designed to bring out the best in yourself.

Sport was the first round. Olav claimed that this was a dodgy round for him. A nice first question, and a lucky second question brought me the round, and Kevin. Film and TV theoretically should be a good game for me. Well, the TV part of it anyway. Luck ran out with the second question , which was well overdue. At least we went to sudden death. Olav, though, was too good, and took Barry. Science, along with Food and Drink probably my least favourite round, came next. 3 guesses, two of which were at least partly educated, and one which was a wild stab in the dark brought me a round which I never have any right to win. Music followed – and I think I had a lucky set of questions to even get me as far as sudden death. As an English teacher, Arts and Books is always guaranteed to prove a major stumbling block !

So moving into the final round I had Kevin and Chris, while Olav had Barry, Judith and CJ. At that stage I was just delighted that I hadn’t been totally outclassed. As long as I wasn’t beaten 3 – 0, then I wouldn’t have been too unhappy. I was lucky to get a straight English question first. Olav was served up a bouncer on dactylology , and lost Cj and the point. However I was served up a bouncer, and lost Kevin and the next point. Fair is fair, and Olav had a decent question on test cricket, which he dispatched over the pavilion roof. I had to gamble a little on the next question, but at least I got it right, and kept Chris. Olav used Barry to correctly answer the next. Chris then told me that the Punta del’Este is in Uruguay. A 3 – 2 lead. Then Olav was bowled two bouncers in succession – a butt and ben – apparently a two roomed cottage, and in town and country planning, which type of property is classed as A1 – shops.

I’ll be honest, I was gobsmacked, and had never expected to win. Hence the shocked expression on my face. I meant what I said about Olav – he’s a much better quizzer than me, and if it hadn’t have been me playing against him, but merely watching it on the telly at home, then I would have definitely felt that he got the short straw with the questions he was asked in the final round. 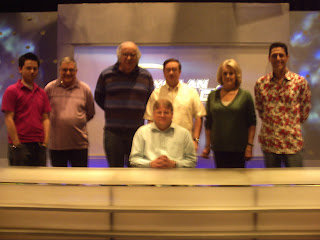 Me, the Eggheads, and Olav Bjortomt, a gentleman, and an incredible quizzer.
Posted by Londinius at 11:22

Great performance, very well done, can't wait for the next match, when's it on? I enjoyed reading your account of being on the show, I'm trying to write about what happened in our first round for my blog (I wrote about how and why I ended up on the team but that was as far as I got) but I just can't seem to remember it properly, it was such a blur, I'd like to have documented it for posterity though since if I can't remember it very well five months on I don't know how I'll remember it in a few years! Any tips?

Why thank you kindly. I got lucky , Olav didn't.

As regards writing it all up, my best advice is to just sit down at your PC/ laptop, and start. If you've already got as far as your selection for the team, then take it on from there. How did you prepare - as a team/individually for the show ? Roughly how much time did you have to prepare for it ? Did you try to do any revision ? What about the day of recording itself - presumably you didn't have far to travel, but when did you have to be at the studios ? What happened before you went into film the show ? Was there any fuss about clothes, makeup etc ? Did you see anyone famous - apart from JP - there ? While the sow was being recorded, how did they do it , that is, was it done in 'real time' as much as possible ? Were there any cock ups or retakes you can remember ? What was your reaction to actually winning your first round, and what did you do afterwards- as a team or by yourself . You might not think you can remember the answers to all of this, but once you start writing you'll probably be surprised at how much it does start to come back to you. I hope this helps