Well, before I begin my well meaning, and in all probability misguided prognostications, lets have a look at how each of the finalists have done to get here in the first place: - 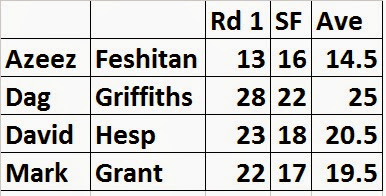 Looking at that, you might be forgiven for thinking that it is all fairly clear cut. Azeez looks like the outsider, having an average several points below the other conmpetitors. On paper you can't squeeze a cigarette paper between Mark and David, while Dag looks like the favourite. Now, don't misunderstand my point - I am not saying that this is not the way it is going to turn out. It certainly seems the most likely outcome, all things considered. However BoB is, not to put to fine a point on it, a funny old game, and it is most certainly not played on paper.

For one thing, by the time you get to the final you can't bank on having a clear advantage on the buzzer for the bonuses. Now, OK, you can't win BoB on bonuses alone, but in a tight game they can make all the difference. There is a proportion of questions that come out during each contest which seem to me to be out and out stoppers, that is, questions to which maybe none of the competitors might reasonably be expected to answer. If you get a run of three or four of these as your starters, then you're sunk, and it can happen.

Well, one thing we can say, as can be said every year, is that anyone good enough to get to the final would be a worthy winner. Yes, Dag looks to be the favourite, and if he does win, then it will be well deserved. However I am loath to rule out the chances of both Mark and David, formidable quizzers in their own right. Azeez, I don't know as a quizzer, but the fact that he made it to the final beating a quizzer like Dave Taylor tells you all you need to know. Gentlemen, I wish you all the best of luck, and look forward to what has every possibility of being a great contest.
Posted by Londinius at 11:44