It comes round so quickly, doesn’t it ? What does ? Well, everything really, when you think about it, except school holidays. However the particular event to which I refer is the Mayday in Melin quiz. If you’ve been with me for more than a year you may remember that the Mayday in Melin is the quiz where I became a born again quizzer, way back in 1994. I’ve won it 4 times myself, but following my last win 2 years ago I was asked to be the question master last year. Hopefully I didn’t do too terrible a job since they asked me to do it again this year. I couldn’t really refuse since the trophy is called the David Clark Mastermind 2007 trophy. Yes, bragging again.

The thing about this quiz is that the format established when the quiz was first revived a few years ago is that its multiple choice. Now you know me, I’m pretty straight laced about what I like and what I don’t like in a quiz, and I think that with things like multiple choice questions less is more, and a little tends to go a long way. Still, the first thing you need to realise when you’re making a quiz is that you’re not making it for yourself. So I shall grit my teeth, and get down to it as soon as I make this posting.

Speaking of making quizzes, it was my turn in the rugby club last Thursday. I have to say that I worked myself up into a little bit of a state about it. Not so much because of the quiz, after all I’ve been compiling quizzes down the club for the last 16 years, and I’ve done a few stinkers in my time and got away with it, so there really wasn’t any great cause for concern on that score. No, it was because I’d made up my mind that I was going to make my stand over this phone cheating business which has been, at the very least, an undercurrent in the last couple of weeks. Well I handed out the answer papers, and the picture handout, and then I made my stand. It was a little pathetic to be honest with you. Far from naming names, or laying down the law it came out as a pretty pathetic , “Ladies and gentlemen, just before we start, can I ask you to please not use your phones to look up answers. Its cheating, and I go to a lot of quizzes, and internet phones are killing them. If you want to know the answers, come up here and I’ll show them to you . . . “ etc. etc. Funnily enough the quizzer I stared into putting her phone away last week wasn’t there again this week, so I have no idea how effective it will be. One other thing which gave me a wry smile was that one of our long term players, whose been with the quiz for much longer than I have, sat there nodding sagely to my plea, and then added ‘Quite right.’ Nice to know, only, well, his was one of the teams who cheated in the New Year quiz. And I don’t suppose he told the cheats in his team that night to put their phones away then ! Oh well.

Did my outburst make a difference ? I have no idea . Although I have to say, it’s the first time this year that my quiz wasn’t won by an underdog , so you never know .

It was a connections quiz – and all the connections were solved by at least one of the teams. This one was the trickiest – one team solved the connection, despite not getting the third part right, but none of the other teams solved it . See what you think : -

1) Which british athlete gained a silver medal in the men’s 400metres in the 1996 Atlanta Olympics ?
2) Who made his only visit to Britain in a very brief stopover at Prestwick Airport in 1960 ?
3) Which is the shortest of William Shakespeare’s play ?
4) What is the connection between your last three answers ?

I’m back to work on Tuesday, and looking back over the holiday I’ve played in a surprisingly small amount of quizzes – only two Sundays, one Thursday, and last Tuesday – famine rations as far as I’m concerned. Still, looking on the bright side, the weather has been fantastic. I’ve been out on the bike every day – and believe me I never thought that I’d be writing a sentence like that this time a year ago ! I took a walk through the nature reserve at Kenfig Pool a couple of days ago, and saw 8 of my favourite species of butterfly. Also we had a very enjoyable afternoon at St. Fagan’s Museum of Welsh Life , when I produced the drawing you can see underneath. Have a great bank holiday . 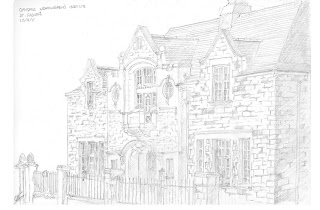 Interesting you comment on internet cheating then give us your toughest connections round - which has me scratching my brain, despite having, I think, two of the answers - and is now making me thinking of firing up google and cheating!

And oh that is a tough one Dave! I like it very much. Once I'd checked the answer I wasn't sure on (I always thought a certain tragedy was the shortest) it clicked, though I didn't know that about the runner. Good, good question - and one very tough to google making it an ideal pub quiz question.

Thanks Ben -
Its my favourite connection of the evening. As I said, only one team had it, although they had Twelfth Night wrongly for the Shakespeare play - I suspect because they had worked out the connection, and put down the first appropriate play they could think of.

Well, I knew parts 1 and 2 but despite having googled part 3 still can't see the connection

I've posted the answers now, and the other sets of connections, which I think are much easier - and so did the teams on the night.