but you don't have to go out of your way to make it happen.

If you phrase a question in a way that makes it possible for people to misunderstand it in any way, then you can bet your bottom dollar that someone will misunderstand it. This is a salutary lesson which all of us who aspire to be question masters at whatever level would do well to take on board.

Fast forward to this afternoon. I’m sorry for those of you who had to suffer less than perfect weather for your bank holiday, but here in the Swansea Bay area its been fine and sunny all day. My mum and step Dad have been staying the weekend with us, so we dragged them out of the house to introduce them to one of my favourite museums, the National Waterfront Museum in Swansea. One day all museums will be like this one, which utilises all the wonder of interactive Information Technology to the full. 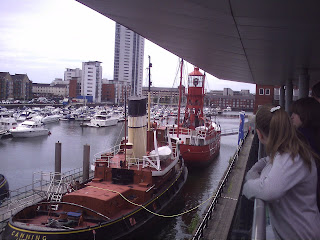 As you can see from the photograph, its in a wonderful setting, since it looks right out onto the Marina. Visiting the museum reminded me of a question I was asked in a quiz a few weeks ago : -
“Which was the world’s first fare paying passenger railway ? “
Now, if the answer – The Stockton and Darlington Railway – has just popped into your head, well, I can understand that. Have a look at the question again, though. As asked, it doesn’t mention steam at all. As asked, the correct answer is
The Oystermouth Railway ( which later became the Swansea and Mumbles Railway )
OK, so when it began it was horse-drawn, but nonetheless it is generally recognised as the world’s first fare paying passenger railway. It actually lasted until 1960, as a tramline, when the council, showing the great foresight and respect for heritage that councils were famed for during that decade, ripped up the tracks, and consigned the trams to the dustbin of history.
As for the question , well, the question master went down the Stockton and Darlington route for the answer. No, Gentle Reader, it was not I who asked for a steward’s enquiry. I didn’t need to . People in Swansea, especially those of a certain age, are justifiably proud of their city’s part in railway history, and several people pointed this out to the QM. His explanation of
“well I thought everyone would know I meant steam railway. “
did not appease many, it must be said, but the time honoured rule of – the question master is always right was observed.

Still, you’ll be glad to know that we had a nice day in Swansea today, at least !
Posted by Londinius at 12:29