Well, that was a good first round, wasn’t it? I’m going to get on to the teams who are automatically through to the second round in a moment, but first, let’s look at the teams in the repechage.

Now, the line up for the two heats is

On paper the first match looks straightforward, doesn’t it? Think again. Look at the two teams’ bonus conversion rates. Durham’s is a very good 59%. But Christ Church scored an exceptional 76.1 %. Yes, Christ Church scored 20 points less than Durham did, but then Christ Church were playing against the mighty Trinity team. This doesn’t mean that Christ Church are favourites for the match, but it means you must not dismiss their chances. Personally, I can’t call it. In fact, although Loughborough and Southampton’s scores were the same, I think it may be easier to predict the outcome. There’s a significant difference between their respective conversion rates, which suggests that although it could be close, Southampton look to me to just have the edge.

Ok, now let’s look at those teams already through to the second round. 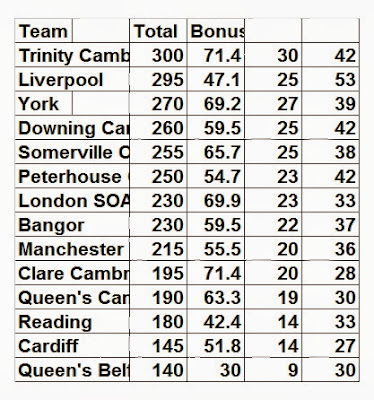 Trinity are probably the easiest to start with. Their score is an exceptional one, achieved with a massive bonus conversion rate of 71.4%. They will fear no one. Are they guaranteed a place in the quarters? No, no team is, but they will be favourites whichever team they happen to be drawn against. Liverpool, having amassed a huge score themselves look formidable, but that bonus conversion rate is a worry, and suggest that if they meet a faster buzzer team than Keele, then they could struggle. York too played one of the less successful teams on the buzzer, but their conversion rate of just over 69% is a very high one, and for me this makes them a better bet than Liverpool.

Ranking the teams according to their match scores, there are only 40 points separating teams 3 to 8. All of them have a bonus conversion rate of 55% or over, except Peterhouse, with 54.7. So there’s not a great deal to choose. Arbitrarily picking on a couple of teams, it’s interesting to see double champions Manchester in the bottom half of the table, with one of the lower scores, and lower conversion rates. Yet I doubt that anyone will particularly want to draw Manchester in round 2, bearing in mind their fantastic track record in recent years. The University of London School of Oriental and African Studies scored a very good bonus conversion rate of 69.9, and they are, I dare say, a team to watch.

There’s lies, damned lies and statistics, apparently, so bear this in mind, but these same statistics seem to suggest that Queen’s Belfast, Cardiff and Reading could all struggle.

Well, I always make a disclaimer that first round form is notoriously unreliable as a guide to second round form, but it’s all we have. That’s my take on it – best of luck to all the teams.
Posted by Londinius at 03:15

Does your historical data suggest that bonus conversion rate is preserved between rounds better than buzzer hit rate? It'd also be interesting to know whether questions tend to get harder in later rounds, favouring teams with greater knowledge, or stay the same, favouring teams who are faster on the buzzer.

It's a good question - which I can't answer, I'm afraid. Jack is always kind enough to compile bonus conversion figures for every match, but this is the first year that I've used it like this. So I too shall be interested to see whether it does give us a reliable indicator of a team's potential performance in the second round.

The show itself claims that the questions get harder from the quarter finals onwards, and anecdotally I think I'd agree. I'm keeping relatively detailed statistics this year, though, so I'll be able to answer that question (for this series, at least) once we get that far.