I quote ,
“ Here is a new pastime.
It is most amusing and once begun, irresistible. I know this to be true, for I tried it on several people. Two Public School boys – and heaven knows they ought to be tired of it – clamoured for more . . . “
Now, stop that, you’re making up your own stories. This unintentionally amusing passage is actually the first paragraph of the introduction to “Can You Answer This ? “ , which I recently bought, making it the oldest quiz book currently in my possession. It was published in 1927, hence the title of this post. Yes, its so old, that for one thing it never even calls itself a quiz book, for starters. In fact it never even uses the word quiz once. 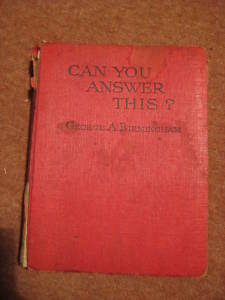 The introduction is rather sweet actually. How about this : -
“ At a luncheon party where I introduced the game a number of intelligent people became incapable of rational conversation, and for several hours would do nothing but test each other’s general knowledge. One day after tea I was forced to be late for an important engagement by the eagerness of my friends for fresh questions. And it was a very important engagement. I had promised to address a Women’s Institute on Hungarian Cookery . ( Honestly, I am not making this up ! ) The Americans, who appear to have invented this game, demanded eight fresh editions of a book like this one in the course of a month in February, a month in which there are only twenty –eight days. “

The introduction, as unbelievably po-faced and genteel as it may be, actually does accurately describe the effect that asking questions can have on a room full of people. My colleagues are none of them quizzers, but they are always asking me when I’m going to be bringing another quiz to road test in the staff room. Mind you, I’m not sure that I could go along with some of the claims the compiler, George A. Birmingham, makes a little further on,

“The man who learns the answers to the two thousand questions in this book can win a scholarship , if he is young enough to go in for scholarships. If he is too old for that he will place himself on a lofty pedestal in society. “

Forgive my mirth there a moment , George. Still, he does make some other points which still hold good today,for example,
“ This new game is best played in company. The pleasure of it is increased when it is shared. Nothing is more delightful than to discover that you are the only person in the room who knows what the Pentateuch is, or to find out that Rudolph Valentino, whom you have failed to identify is, after all, a person whom no one with your superior culture can be expected to know about. “
Yes, I’ll try that one next time I get an Entertainment question wrong. Sorry boys, but you can’t expect someone with my superior culture to know about that. Sure to go down well at the Rugby club.

“It is an amusement, “ continues George, “ in which the elderly have a distinct advantage over the young . “ Well, as we all know, that depends on who is setting the questions nowadays. If by ‘elderly’ he meant the middle aged and upwards, then I’d probably agree. George has a theory for this,
“The fact is that there is a blind spot in all of us. We know the things that are written in the history –books ( well, not all of us, G. ) We know the things that came within our own memory. ( again . . . ) But between the places at which the history-books stop and memory begins there is a gap, and since history-books are being continually brought up to date, that gap is far larger for the old than the young. “
Most of the rest of the introduction is taken up with George explaining how the questions were selected, and how the book is organised and meant to be used. A panel of six selected the questions, and there’s a definite hint of pique in George’s comment,
“ I myself wanted to introduce a question about the tenets of the Monophysites, a subject with which I think every school boy must be familiar . ( Honestly – not making it up. ) I was severely snubbed over this ( can’t think why . )

I love the end to the introduction as well. George explains how we should try to work on our own weak areas,
“ I find, for example, that I am shamefully ignorant of the names and reputations of movie stars. From this on I intend to stop outside every picture house I pass, and make a mental, and if necessary, a pencil note of who is ‘featured’. . . Having found your weak spot, it is plainly a duty , and ought to be a pleasure, to strengthen it. It is also a duty, and certainly a pleasure, to strengthen the weak spots of other people. “
You can just imagine that George probably took a great deal of pleasure in pointing out to other people exactly where their weak spots lay too.

I’ll just give you the first set of ‘Sitters’ questions. These are the one on which his public schoolboy chums scored on average 43%. I warn you though, George stresses that ANY adult ought to be able to score 50% on them !

I’ll give you the answers in a few days. To our 21st century eyes certainly a weird set of too-easies , mixed with what-the-hells . Some remarkably succinct and askable questions – the meaning of Sinn Fein one being an example of a question that I’ve actually asked almost verbatim in the club in the past – and some questions which fail the test through being vague, through allowing for the possibility of too many alternative answers, or through being just too damn easy. Be honest, though, even though the compiler never uses the word quiz, you have to admit that this is just as much a quiz book as any that are published today. Which leads me to speculate. I did wonder if the quiz book was a post war phenomenon. Obviously its not. So just when was the first ever quiz book written and published in the UK – that is a book containing general knowledge questions, compiled solely for the amusement and entertainment of the reader ? Any answers to this one gratefully received.
Posted by Londinius at 06:19

May I ask where you managed to acquire this book? Was it something you had specifically been looking for having been aware of its existence, or was serendipity to blame?

Pretty serendipidous, actually. Every now and then I do idly check ebay, and from time to time I've picked up a couple of little gems like this. Prior to seeing it on ebay I had no idea such a venerable quiz book ever existed.

"Ask Me Another" was hugely successful in 1927. If you look through many American newspaper ads of the day, they often used a version of "ask me another" quizzes to promote various products. The author also published a sequel but the buzz had worn off by then.

Thanks for that. I honestly had no idea that quizzing culture of any kind existed that early.