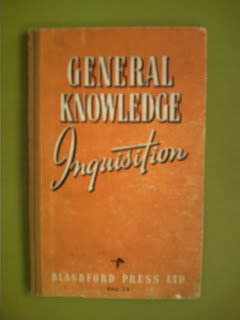 In my last post I mentioned that I’m a sucker for old quizbooks, and I’ve just bought one from 1952. You can see it in the photograph on the left .

One of the joys of finding books like this is that it’s such a far cry from the run of the mill stuff that you get so much of nowadays. You know the sort of thing I’m talking about – huge paperbacks as thick as a housebrick with garish covers which proclaim themselves “The Greatest . . “ or “The Ultimate . . . “which have between 5,000 and 8,000 questions, none of which would cause the average contestant on The Weakest Link a moment’s anxiety. I’m being facetious of course. There are actually some good modern quizbooks out there, but there’s also a hell of a lot of dross too. This is something from a bygone era.

Have a look for yourself.Granted there are some questions which are well out of date, and a significant number which are just far too easy. Having said that, though, there's a pleasing amount of questions which should intrigue the casual and even the more serious quizzer. Here’s a selection of some of the questions from the first couple of rounds in the 1952 book. See what you think .

A few surprisingly tough ones there, eh ? Don’t worry, the answers are all at the bottom of this post.
Of course, its not perfect. There’s a few questions of the
Name the two most famous diary writers ? –
Name the most famous writer of fairy stories ? –
variety, which call for value judgements, and have perfectly valid answers which are at variance with the answer in the back of the book. Mind you, it never asks anything quite so un-PC as this one from the 1951 Top Of The Form Quiz Book –
Why do savages hold their ears to the ground ?
I’m not making it up, that’s the exact phrasing ! Well, it was the 1950s, I suppose.

Both of these books, the 1951 Top of the Form book and this 1952 effort clearly bear the stamp of having been produced at a time when Britain was in the grip of post – war Austerity. The covers are desperately unexciting, and there’s a small number of pages. They squeeze the questions in, though, and for all their drawbacks, I can’t help feeling that there’s something basically honest and decent about them. OK, the answers, then : -

For the two most famous diary writers, I would answer "Samuel Pepys and Anne Frank", and for the fairy tale writer probably "Hans Christian Andersen". What were the answers in 1952? Also, why do savages hold their ears to the ground?

Coincidentally, I bought a book from 1952 this morning - it had a slightly more exciting cover, which can be seen at http://www.pattayabridge.com/bridgebooks/bridge_easy.jpg

Hi Andrew - how are you keeping ?

Sorry, I should have put down the answers to those two questions. It did indeed give Hans Christian Anderson - what about the brothers Grimm ? - but for diairsts it gave Pepys and John Evelyn. All of which proves my point - those questions are a matter of opinion rather than fact, and as such probably shouldn't be asked in a quiz, at least not in that way.

I'm going to have a look at your book now.

Tried to look at the book, but went to a page where it says that the page does not exist !

I thought it might be too early for Anne Frank to be correct - interestingly, the UK edition of her diaries was also published in 1952. (I went for Andersen instead of Grimm because it said "writer", not "writers"!)

The timing of such questions can be key - I remember a TV quiz having as a question "What's the first name of the pop star _ Jones?" This being about 1984, the expected answer was "Howard", Tom Jones being terribly old hat at the time!

Sorry about the link failing. Google Search for Images of "bridge is an easy game" (the title of the book) may work. In any case, it struck me as an unusually wordy cover, reading "Iain Macleod M.P. - BRIDGE IS AN EASY GAME - describes the Acol system which is now played by nearly all the leading players in Great Britain" - all in a large font. Whew!

Back to quizzing - Min (fellow Archers Admirer) and I had a fun audition for "Pointless" last week - now waiting to see if they liked us!

Well, Pointless has allowed some good quizzers on, so your heroics in Only Connect last year need not necessarily count against you.