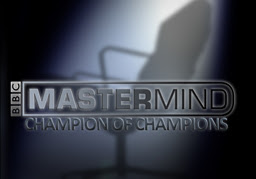 OK, I think that the cat is safely out of the bag now. The BBC have started to advertise tickets to be in the audience for the show so I feel happy that I can share this one with you. In the summer, there will be a Mastermind Champion of Champions tournament, which BBC2 will be offering as an alternative to some of the world cup games. Yes, I have been invited, and yes I have accepted the invitation.

Please forgive me if I don’t share my specialist subject with you yet. I’m keeping a journal of my involvement with the show, and I promise that I will share all after its been broadcast, as I did with AYAE and Brain of Britain.

I don’t know who else is taking part. I believe that a mixture of champions from all 4 incarnations of Mastermind will be involved.

As an aside, to my knowledge the BBC have twice made a tournament of champions. In 1975, the first four champions – 1972’s Nancy Wilkinson, 1973’s Patricia Owen, 1974’s Elizabeth Horrocks and 1975’s John Hart took part in what was called the Supermind Challenge. This was actually filmed a scant hour after the 1975 final, and Magnus Magnusson himself described it as “a light hearted joust”. This was won by Nancy Wilkinson.

Again, to quote from Magnus Magnusson’s “I’ve Started So I’ll Finish “ –
“It had been decided to switch the schedule of transmissions from late Autumn to early spring ( from October 1981 to January 1983 ) and since 1981 had been the tenth series, it seemed a good idea to fill the empty year and celebrate the tenth anniversary with a tournament featuring the first ten Mastermind Champions in a special ludus ludorum “

This 1982 series consisted of two semi finals of five champions each, with the winner and runner up going through to the final. Each had to choose different subjects from any they had chosen in earlier appearances.
The first 10 champions, who all took part, were in order: -
Nancy Wilkinson
Patricia Owen
Elizabeth Horrocks
John Hart
Roger Pritchard
Sir David Hunt
Rosemary James
Philip Jenkins
Fred Housego
Leslie Grout
The final was contested between Patricia Owen ( 1973 ) Sir David Hunt ( 1977 ) Rosemary James ( 1978 ) and Philip Jenkins (1979 ) The final was won by Sir David Hunt, and all three of the others tied for runner up.

I have no illusions about being good enough to win, or even be a finalist. Doesn’t matter – its going to be fun, and at least I’ll get to meet some of the other champs too.
Posted by Londinius at 06:05