I joined Mensa in the summer of 2013, so it was too late for me to enter the Brain of Mensa competition that year. I got to the final in 2014, and finished 3rd. I didn't participate in Brain of Mensa last year - it was not a great year for me for one reason and another. Still, I missed it last year, and so had another go. I won my first round heat, and came second in the semi, earning a place in the final. To be honest, I wouldn't have been too disappointed if I'd managed third again. I'm still in a bit of a state of shock that this happened: - 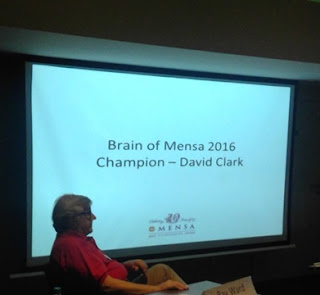 It would not be a lie to say that my main motivation in joining Mensa was to play in and try to win Brain of Mensa. I can't think of anything more to say about it other than clichés. But I am over the moon.

Well done!
How big was the field in the heats? Quite a feat to outrun a crowd of mensans, I'll bet.

Hi Ian
Simple answer is I'm not sure, but as only the winners of the heats go through, I would imagine that there were 8 heats, which means a field of about 32 - it's not guaranteed that a heat has 4 people in it - my first ever heat was one of three for example.

Two of the finalists were former inners - in fact both had won on more than one occasion, so winning came as a surprise, and is something I'm very proud of.