If you’ve ever checked out my quiz website you might have seen that I have a page all about tie in quizbooks from various TV or radio quizzes. I’ll admit it, I do have a love of tie-in quizbooks, the good, the bad and even the downright ugly. It all started when Mrs. Londinius bought me the First TV Top of the Form Quiz Book from a church jumble sale a couple of years ago. Published in 1968, and based on the BBC TV show of the same name, it packs 700 questions into 128 pages. I didn’t expect a lot in terms of quality, but actually considering that its for kids it ain’t bad, and I’ve used quite a lot of questions from it in my quizzes over the last few years. Which led to me acquiring the other 7 books in the series. In the meantime Mrs. L. had come up trumps from another fete/charity shop with the New ( new in 1982 ) Ask the Family Quiz Book. I liked that too, and so collected the three previous ones. And so on and so forth.

I now have a collection of about 80 tie-in books. They vary vastly in quality. As a rough rule of thumb I tend to like the older ones better. I find they’re a bit more honest, although there are some tie-in books published since 2000 which I like. The three 15 – 1 books ( 2000 for 2000, 2001 for 2001 and you’ve guessed it, 2002 for 2002 ) are honest , no nonsense quiz books, and always worth dipping into for a few questions whenever I set a quiz and I’m stuck. Likewise the three Weakest Link books. The Eggheads book is a little on the easy side, but its OK, and the People’s Quiz book is great for pretty recent popular culture and entertainment questions.

As tie-ins go, for me no others can compare with the 1978 University Challenge book, published by Arrow, the Round Britain quizbook – a 1975 BBC effort, and probably the daddy of them all, John P. Wynn’s 1972 Brain of Britain quiz book. These are all fiendish. Too hard to use in the pub quiz, these are just a pleasure to work through by yourself.

Why am I rambling on about this ? Well its just that I had another of those pieces of luck yesterday morning. Mrs. L. asked me to drive her and a friend over to a church fete , and on the basis of – you never know if there’ll be anything there if you don’t take a look – I ambled over to the bookstall, and the Radio 1 Quiz Kid quiz book caught my eye. Under the circumstances it would have been rude to haggle over the 50p asking price. 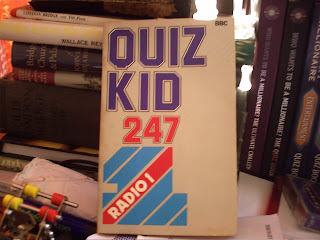 As you can see from the front cover, its rather an ugly little devil, isn’t it. Personally I think I just about recall Quiz Kid from the mid 70s. It was presented by wrinkly old Fluff Freeman, and in the last series by Kid Jensen ( well, everyone was a kid when compared to Alan Freeman ) . It was a pop music quiz between, well, kids. That’s about it.

I started leafing through it yesterday, and I have to say I was really pleasantly surprised. It was put together by Tony Hale, whose baby Quiz Kid actually was. Just a quick shufty through the first quiz shows a number of chestnuts – or what were chestnuts back in the day when the book was published in 1977. For example : -

3) – What is the connection between Motown and MC5 ?

It’s the answers section of this book , though , which really lifts it out of the ordinary. 55 out of 123 pages are just taken up with answers, and the reason why they take so much of the book is that you get so much explanation with them. For example, here's the answer the book gives you to just the first question I quoted : -

4) Andy Fairweather – Low. This welsh rock-pop band had considerable teen appeal and chart success, in the late 60s with hit singles such as “Bend Me, Shape Me” (1968) High in the Sky (1968) Half As Nice ( 1969 ) Fairweather Low’s vocal style, distinctly high-pitched and semi strangled graced the charts again after a lay off with “Reggae Tune” in late 1974, and “Wide Eyed and Legless” in 1975.

I shan’t give you the full answers given in the book to the rest, but you can see what I mean from this, I’m sure. The other answers were

5) Chubby Checker
14)Limmie and the Family Cookin’
3) The City of Detroit.

If you want to read any more about TV Tie in Quiz Books, then you can visit the page on my website by clicking on this link : -

By pure coincidence, Dean Wilkinson's book has a foreword by Ant and Dec, and last night I spent a precious half hour of my life watching the first part of their new prime time offering Push The Button. Alright, nobody forced me to do it, but on the offchance that the show might actually have some quiz content I gritted my teeth and watched.

I'm not going to be snotty about this. Push The Button is firmly in the category of game show, and as such I have no real right to criticise. Its not for me, but if other people enjoy it then that's great. Basically it involves two family teams of five - a la Family Fortunes. The two families compete in individual head to heads to - no, not to win money, but to stop their prize pot of £100,000 at the start of the show dwindling away. The team that collectively perform best will have lost least.

Oh, there was quiz content in the two games I saw. First game involved team members placing big models of tourist attractions on the right place in a giant mercator's projection map of the world. Sorry, but camera work , and Messrs McPartlin and Donnelly's antics rendered it virtually impossible to see where the lights and numbers were on the map, and whether things were going in the right place or not.

The second game involved - I kid you not - actors who have played characters killed in soap operas rising up out of their coffins, so that team members can identify their character, their show, and how they died. The two team members involved had been given a big book to learn prior to the show. Like I said, it wasn't for me, but the two Geordie lads are an engaging pair, whose cheeky chappiesh charm works well for this vehicle. I just wish it wasn't so damned slow. Two games in half an hour isn't a lot for your money. Still, it would have had to have been good to prevent me hopping channels for the return of Who Dares Wins.

I never caught much of the first run of this series, when it was aired in 2007/8, and rumour has it that this second series was actually recorded quite some time ago. If you've never seen it, that blokey, breezy Nick Knowles hosts a game between two pairings of contestants, who will have never met before their first appearence in the show.One of these will be the defending champions, since its winner stays on. The two parings battle it out in a best of three format. A category will be announced - last night's first was Will Smith films, and teams will have to bid against each other as to how many they can name - sort of a reverse Name that Tune. When they are satisfied that the bidding is high enough, one team will tell the other to name them. So if the team bid 10 and name 10, they take the point. If they bid 10 and name 9, then the other team win the point. Got it ? I should think so. Its simplicity is one of this show's selling points.

It seems to me that this show has a similar appeal to Pointless - which incidentally starts again on BBC2 next week, I believe. They do show all of the alternatives, but not for anything like long enough if you're playing along at home. Still, you can pause it on the iplayer.

The winning team get a chance at the cash. Nick announces a category, and 15 correct answers brings £50,000, with lesser amounts for 3 answers - etc. in regular amounts up the ladder. The champs failed on their first shot, which escapes me at the moment, but collected the lot for naming 15 British medallists - of any colour medal- in the Beijing Olympics. Even if this was recorded a lot closer to when the Olympics were run in 2008 it was still a very fine achievement.

Its not a bad show at all, although it ain't perfect. I don't like shows being interrupted for the flippin' Lotto for one thing. For another, the vast majority of last night's categories were Entertainment based. Yeah, I know that the general public likes Entertainment. But out of 7 categories in th show, including the two jackpots, only 50 Biggest Countries of the World and British Beijing Medallists weren't from that category. Will I watch again, though ? Yes, I will. It beats the hell out of Nick Knowles' Guesstimation last year.

One of the categories on Who Dares Wins started me off on a train of thought, the like of which I think of as a trivia train. Allow me to explain. The champs were asked to name a number of characters from Only Fools and Horses who have appeared in more than one episode. They started off very confidently with the regulars - Del, Rodney, Cassandra, Raquel, Damien, Granddad, Uncle Albert. However they stumbled when they incorrectly recalled the name of the bent copper who was Raquel's first husband as Skinner, when it was in fact Slater.

Two british actors who have won oscars during their careers both played cameo roles in Time Bandits. Name them.

Sean Connery, who played Agamemnon should come straightaway, but Broadbent who played a TV gameshow host is more difficult. The danger with this one is you might plump for Ralph Richardson who played The Supreme Being. He was twice nominated, but never won. Or possibly you might try Ian Holm, who played Napoleon. He was nominated once, but didn't win.
The trouble is that once you board the trivia train its difficult to get off. Ian Holm then.

Both Ian Holm and Kenny Baker, who also appeared in Time Bandits, have which other film link, that they share with Brigitte Helm, Lock Martin, Brent Spiner and others ?

The answer of course is that they have all played robots or androids on film - Ian Holm was the android Ash in Aliens - Kenny Baker as you know was R2D2 in Star Wars - Brigitte Helm, a bit trickier, was both Maria and the Maria robot in Fritz Lang's Metropolis - Lock Martin was the giant robot Gort in the 1950s The Day The Earth Stood Still, and Brent Spiner was the android Data in all of those Star Trek The Next Generation movies.
The train rumbled on, but I'm sure you'll be delighted to know that I shan't bore you with all the stops this particular one called at.
Posted by Londinius at 08:20