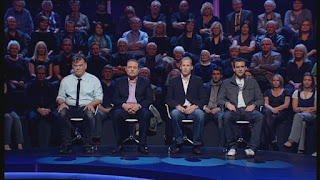 The second week of slebs in the chair started with comedian Stewart Lee. Actually, I say comedian, but there’s more to Stewart Lee than just that. Did you know that he co-wrote “Jerry Springer, the Opera “ ? Well, if you watched this show you did. Stewart Lee offered us the only subject about which I knew absolutely nothing. Derek Bailey , who died five years ago, was a great British jazz guitarist. It sounds obvious to say it, but Stewart Lee is obviously a huge fan, since he scored a massive 17 points, representing the Motor Neurone Disease Association.

John Thompson offered us a seriously popular culture subject , in the shape of James Bond Villains. He says that he would desperately love to play a Bond villain himself, and suggested that a northern English son of Hugo Drax might be in order. We’ll see. This round was particularly on Bond movie villains, rather than the originals from the books themselves. A bit of a dodgy start held him up a bit, but when he got into hi stride he virtually rattled them off, and finished with a fine 14 points. John was donating his fee to Cancer Research UK

Paralympian swimmer Sasha Kindred was representing the Fire Fighters Charity tonight. He offered us the subject of Manchester United from 1990 to the Present Day. This was a surprisingly wide ranging round considering the relatively narrow twenty year time frame, and the fact we were only dealing with one club. Sasha Kindred was equal to the task, though, and got into double figures, scoring 10 points and 3 passes.

Matthew Lewis , as John Humphrys pointed out on at least three separate occasions, is best known for playing Neville Longbottom in the Harry Potter films. Nuff said. He showed impeccable musical taste by picking Oasis as his specialist subject. He didn’t do a bad job either, considering that this was another wide ranging round which went some way beyond the songs and the records themselves. He donated his fee for the show to CAFOD.

Sasha Kindred started the GK round a daunting 7 points behind Stewart Lee, and never looked as if he was going to make a huge impression on the lead. He finished with 14 points. Matthew Lewis is probably the youngest person to take part in this series, and I’m sorry, but someone this young is at a disadvantage in a general knowledge round. So his 9 points was actually a pretty good performance, all things being considered, and it did at least mean that he had set a score that the others would have to try to beat.

John Thompson never looked 100% convincing in his general knowledge round. Still, as the man who gave us ‘Welcome to Jazz Club . . . Grrreeeaaattttt ‘ in the Fast Show I was rooting for him to do well. At the end he was asked which actress is the mother of actor Sam West. He knew who it was, at one point telling us that it was the actress who played Sybil Fawlty. Well, quite right John. Unfortunately he didn’t quite manage to mention that her name is Prunella Scales, and so missed the point. Still, at least 25 meant that Stewart Lee had to score 9 to win, and going by tonight’s rounds, maybe that wasn’t going to be a foregone conclusion.

So it proved. Stewart rattled along comfortably for the first minute . However, once he reached 25, and only needed one more, he embarked upon a spiral of passes and wrong answers that he only managed to extricate himself from on the penultimate question. Still, a win by a point is still a win, and his score of 26, while more modest by the standards of this particular series, was enough to bring him the trophy.