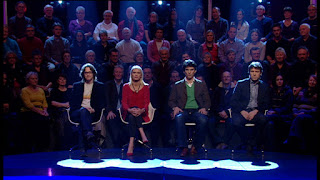 According to my research this is a 10 show series of sleb MM, as opposed to the usual run of 5. So I shall refrain from posting the stats of the series until after the last show has been aired. This is interesting, since I believe that we are only just over a week away from the recommencement of the current series of proper Mastermind. Will the two overlap ? Surely not.

On to tonight’s show, then. Ed Byrne is a well known Irish comedian, with many appearances on panel games such as Mock The Week and Never Mind the Buzzcocks under his belt. Tonight he offered us the Star Trek Movies, a sort of companion piece to Darren Bennett earlier in the week who took the Star Wars movies. I think there’s more Trek films to revise. Ed’s fees were going to Console – Living with Suicide.No need for Ed to feel suicidal about this performance either, since 13 is a good score, and at least gave him a shout in the next round.

Remember Anneka Rice ? Not if you’re under 30, doubtless. Still, a significant number of us probably quite fondly remember the Challenge Anneka programme. Tonight her challenge was to answer questions on Jean Rhys. Jean Rhys is best known for writing “Wide Sargasso Sea”, a sort of prequel to one of my less favourite books. I have a theory that the world is divided up between Jane Eyre people and Wuthering Heights people, and I’m a Wuthering Heights person. Alright its not much of a theory, but there you go. Coming back to Anneka, her fee was being donated to Chase Hospice for Children.This was a magnificent round of 18, with no slip ups until 2 of the last three questions.

Tristan Gemmill plays a doctor in Casualty, and has also been in Eastenders at one time. He’s certainly a man after my own heart, choosing the Apollo Moon Programme as his specialist. I was got up by my parents at some ungodly hour in the night when I was five years old to watch Neil and Buzz make their first ever moon walk, and I’ve always been fascinated by the Apollo programme ever since. Tristan’s fee for the show was donated to The Forever Friends Appeal of the Royal United Hospital Bath . This was another very good round. As I said, I’m fascinated by the Apollo programme myself, but I only managed half the number that Tristram Gemmill managed – he certainly had done his homework, and at the halfway stage 15 at least meant that he was in contention, even if there was a bit of daylight between himself and Anneka.

John Bishop , comic and actor, is not someone I knew of before the show. Still, we at LAM try to give everyone a fair crack of the whip. Answering on the Irish Potato Famine, John’s fees were donated to The Smile Train. The Potato Famine turns out to be a much wider subject than you might expect, and so John Bishop didn’t manage to put himself up amongst the chasing pack, scoring 9. This ensured a swift return to the chair. In the inter round chat he explained that 3 years ago he decided to give everything up to become a comedian, and the rest is history. A flying start to the round looked good, but a failure to identify Major Major as being a character in Catch 22 stopped him dead in his tracks, os in the end he managed 9 , to equal Anneka’s 18.

Ed Byrne explained how he may get hate mail for getting some of his Star Trek questions wrong. Surely not. He might get hate mail from Alan Carr for not remembering that he co-presents the Friday / Sunday Night project with JLC. Still, as we always say, anything in the teens is a good GK score, and Ed scored 14 to give himself at least an outside chance of the trophy. Tristan Gemmill soon put paid to Ed’s chances, though, with a great score of 16, even though he’ll be kicking himself for not getting the nut named after a country of South America – the Brazil Nut. Still, he deserves credit for becoming the latest member of the 30 plus club.

The challenge facing Anneka in the last of the GK rounds, then, was to score 13 points and 1 pass or better. It became pretty clear within a short space of time that Anneka wasn’t going to do it. There’s nothing wrong with the score that she got, but there were just too many questions where the answer wouldn’t come, and the flippant answer threw the correct one out of her mind – eg – Bedlington and Skye are examples of which species of dogs – answer – fierce ones. Well, sometimes, yes, but not the kind of thing to bring you the poins you need for the win. So, Well done Tristan Gemmill.