I often tell people that I'm semi retired from quizzes now. However there is still one competition that I love playing in, and that's Brain of Mensa. It’s not entirely true that I only joined Mensa so that I could play in Brain of Mensa. However it is true that it was a big factor in my decision to take the tests in 2013 to see if I could get in.
I played in the 2014 competition, and got to the final, where I was comprehensively beaten by the mighty Les Hurst, and that year’s champion, Egghead Steve Cook. To be honest, I’m not entirely sure I made a conscious decision not to enter in 2015, but just never got round to it. Still, I did miss playing in the competition that year, so I made up my mind that I would enter again in 2016. I also took a long hard look at myself, and thought about my attitude. Did I want to win? Too royal I did. Did I think it was going to be easy? No, 2014 had proven that. So I gave myself 10 years to try to win.
Come 2016 I won my heat, and came second to Les in my semi. At least this time though I wasn’t beaten out of sight, and with a dollop of luck on my side could have pushed him even closer. Well, that dollop of luck came my way in large amounts in the 2016 final in London. I don’t think it was by a huge amount, but I won. Which caused me to rethink my attitude. Now that I’d won, I didn’t need to put any pressure on myself, I could just play for the fun and enjoy it. And I did enjoy 2017’s competition. I was out with the washing, and frankly lucky to get second. Les put in probably the most complete performance I’ve ever seen in a final in 2017, and thoroughly deserved his 4th win.
So to yesterday’s 2018 final. I thoroughly enjoyed a great quiz, expertly put together by Brian Daugherty, which was played in the right spirit. At the end of the 6 rounds, both Les and I were tied with the same score. We both agreed that we were perfectly happy to leave it as it was, and share the win. It seemed that Brian would have gone along with this as well, but Bobby from Mensa, very apologetically, explained that they have to have just the one champion (although he didn’t really explain why). Neither Les nor I really wanted to play the round of 6 questions to decide things, but we didn’t really have any choice. So, to cut to the chase, the records will say that I won, because I answered one more question out of 6 right. Don’t get me wrong, I am absolutely delighted to become a double BOM winner, and to get my name on the trophy again. However, the fact is, whatever the record books say, we all know that Les and I were joint winners. 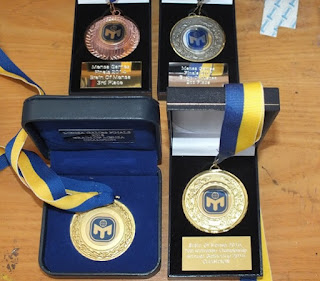 Many congratulations, David. Surely all that's left on your bucket list now is to get a team together and come and smash the Eggs?

Hi Steve. Tried it once already about 14 years ago, and we were the ones who ended up with egg on our collective face!

Many congrats, David. You're truly a brilliant quizzer. How much of a score is good enough in the final to win the Brain of Mensa